Campaigners have occupied two former council houses in Park Street on the day that Southwark Council sold the historic building at auction for almost £3 million. 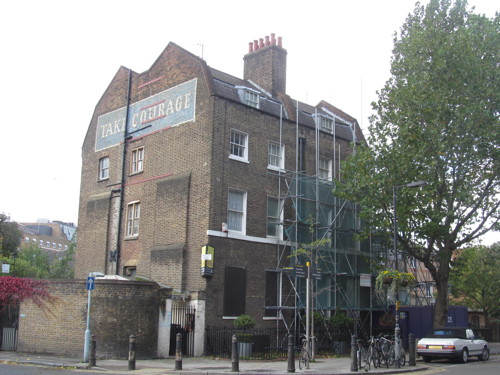 Last week we reported on Southwark Council's plan to sell the building at the corner of Redcross Way and Park Street.

On Monday morning the building – which dates from around 1820 and was linked to the nearby Anchor Brewery – fetched Ł2.96 million at auction.

The authority says that this cash windfall – coupled with the estimated Ł500,000 cost of refurbishing the building – will enable it to build 20 new homes as part of its major council house building programme.

In the early hours of the morning campaigners from Housing Action Southwark & Lambeth moved in to occupy the building.

"We have occupied this building to stop yet more council housing being sold off to private developers," said Sarah Morris, a local housing activist involved in the occupation.

"Southwark Council has a waiting list with 25,000 people in need of quality, secure, and truly affordable housing that this building once was.

"In the face of such housing need in the borough, London, and the whole of the UK this sale of council housing is madness.

"The attempted sale of this building is a part of the social cleansing that is happening across London where local working class residents are being forced out so that wealthier people can buy it up.

"We hope that by taking direct action, we can stop the sale of these homes so that they remain a public good rather than another empty building owned by a property speculator.

"Community-led occupations such as our own to defend our council housing could be made illegal if this punitive law is extended."

He wrote: "The economic reality is that we have to try and use our resources to maximise the benefits for the residents of our borough.

"The high value of this one property will help us build at least 12 new council homes of various sizes.

"SE1 is changing whatever we do as a council – it is time for some people to embrace that change and ensure that it brings benefits to the area rather than opposing everything for the sake of it."