The Scottsboro Boys at Young Vic

Unlike Rosa Parks or Little Rock, the Scottsboro Boys haven't entered the lexicon of pivotal moments in the American civil rights movement - at least not in the UK. 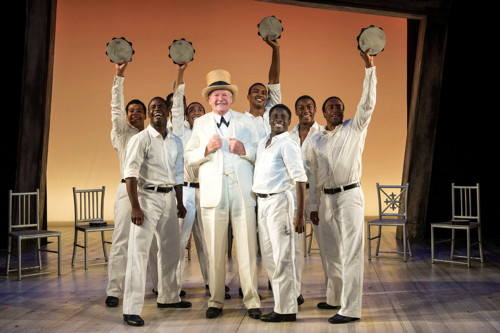 Yet their experience is exemplary of the injustice which fuelled the movement and is as tragic as any of the thousands of other instances of prejudice and cruelty. Thus The Scottsboro Boys introduces us to (or awakens our knowledge of) the story of nine young black boys caught up in one of the greatest miscarriages of justice in twentieth century America. And it does so in an unexpected and brave manner.

The nine Scottsboro Boys were wrongly accused of raping two white women in Scottsboro, Alabama and sentenced to death by a racist jury and judicial system.  There followed years of mis-trials and farce until, over forty years later, the last of the boys' names were cleared. They were officially pardoned by the state of Alabama in 2013.

John Kander and Fred Ebb (of Cabaret and Chicago fame) decided to tell the story of the boys' fate through the form of a minstrel show. By not playing it straight, the absurdity of their situation is enhanced. This form of musical show, once so often used to mock blacks, is used instead to mock the ridiculousness of the injustice dealt to them. White actors do not black up, black actors do not white up. Only at the end, in a novel touch, do the black actors black up. All you can do is laugh to keep yourself from crying.

The nine protagonists all provide extremely powerful performances, bringing spirit, strength and youth to their roles. Their tormentors – embodied by familiar figures from minstrel shows, Mr Tambo and Mr Bones – are brilliant, impossibly cruel whilst equally absurd. The show is excellently choreographed and the comic moments are truly laugh out loud funny.

There is an interesting twist to the story of the Scottsboro Boys. Rosa Parks (then Rosa McCauley) met her future husband Raymond at a Scottsboro Boys rally. In one of the final scenes of the musical it becomes clear that the young, silent woman who has been present throughout the play observing the plight of the young boys, is Rosa Parks. The message should be clear – this seminal moment in the civil rights movement would not have occurred if it hadn't been for the Scottsboro Boys – yet the link between the two stories goes unexplained.

In a case of the truth being stranger than fiction, within a month of the release of the four younger boys (after six years on death row) they were performing in a vaudeville act in Harlem. It is hugely powerful when the actors – all up to this point seemingly willing participants in the minstrel show – walk off stage and the show ends. These boys never stood a chance; their lives were forever blighted the moment that they found themselves in the wrong place at the wrong time. The Scottsboro Boys helps gives them the justice that they were deprived of for so long.