Waterloo: put your bin out at wrong time and face Ł1,000 fine

Traders and residents on The Cut and Lower Marsh have been warned that they face fines of up to £1,000 if they put rubbish bags or bins out on the street at the wrong time of day. 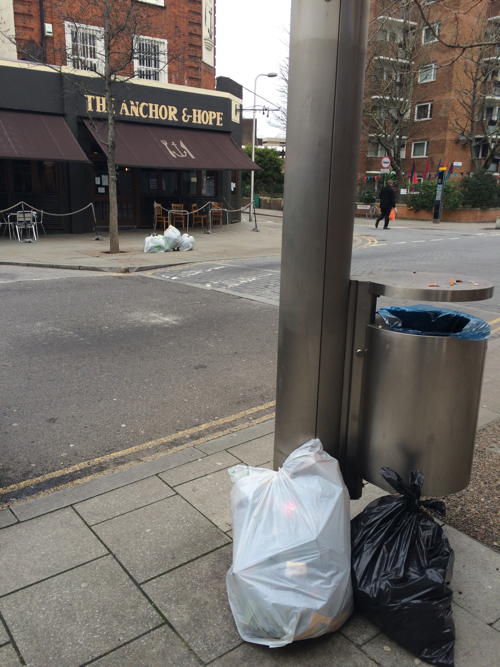 Lambeth introduced the timed collections scheme in Streatham and West Norwood in November last year and will extend the same rules to Waterloo and Brixton from 26 February.

The policy is designed to reduce clutter in shopping areas, as well as ensure that companies don't try to avoid their responsibilities by putting bags out without paying for a commercial waste collection.

When the new rules come into force, household and commercial waste can only be placed on the highway between 7am and 8am and from 5.30pm to 6.30pm.

In Waterloo, the affected area covers the whole length of Lower Marsh as well as The Cut as far east as the boundary with Southwark. The rules will also apply on Westminster Bridge Road from the railway bridge to Lambeth North Underground Station. In Waterloo Road, the zone runs from The Old Vic to St John's Waterloo.

Anyone who puts rubbish out on the street outside the permitted hours could be fined up to Ł1000 in a magistrates' court.

The council says that in Streatham and West Norwood most businesses are complying with the new rules but already 23 statutory notices have been issued to repeat offenders.

Cllr Imogen Walker, Lambeth's cabinet member for environment and sustainability, said the scheme is working well so far: "Consultation on the collection periods raised some concern with officers as they were during the rush hour periods however these proved unfounded and feedback from both Transport for London and Veolia have indicated that the introduction has had little or no impact on traffic flow or our ability to collect the waste."