Sizwe Banzi Is Dead at the Young Vic

A play which comes loaded with history but fails to live up to expectations. 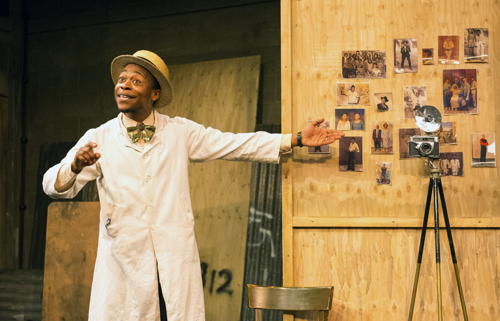 Before entering the auditorium the audience for Sizwe Banzi Is Dead is forced apart, split by race into black and white. It remained physically divided throughout the performance. Even with the knowledge that this is all for show, it is a deeply unpleasant experience.

Yet for the first half of the play there is limited mention of apartheid.

Instead, the inequalities and absurdities of 1970s South Africa are introduced by the charismatic Styles, played by Tonderai Munyevu, in an extremely funny one man show. Styles’ story is one of triumph over adversity, the small guy standing up to the big guys.

Having worked in a car factory, where he acted as unofficial (and often inaccurate) translator between the black workforce and white management, he decides to become his own boss and sets up a photography studio. Here he captures snapshots of the lives of his fellow men, providing them with the dignity that they are so often denied by the state.

Enter Sizwe Banzi. In a humorous piece of physical theatre, Sizwe has his photograph taken by Styles before he recounts his own backstory. At the heart of Sizwe’s predicament are the pass books which were used as means of controlling the movement of black South Africans during apartheid. Thanks to this discriminatory and deeply bureaucratic system, Sizwe is forced to question and decide the value of his own identity.

It is a powerful story, delivered by two impressive actors. But the time taken up by Styles’ story means that too little time is devoted to Sizwe and he is introduced to the audience too quickly for a meaningful attachment to form.

This is not fault of Sibusiso Mamba, who plays the part of Sizwe Banzi with the required measures of vulnerability and humour.

The play won two Tony awards in 1974, prompted the South African government to arrest its playwright and performers for treason and it now returns to the Young Vic following a sell-out run. But when the most impactful moment of the performance is the entrance, this play lacks the punch required to live up to its reputation.