An armed robber who was apprehended by passers-by including a police officer, a trainee ambulance driver, two roofers, two security officers, a bank manager and an ice cream man has been sentenced to nine-and-a-half years imprisonment. 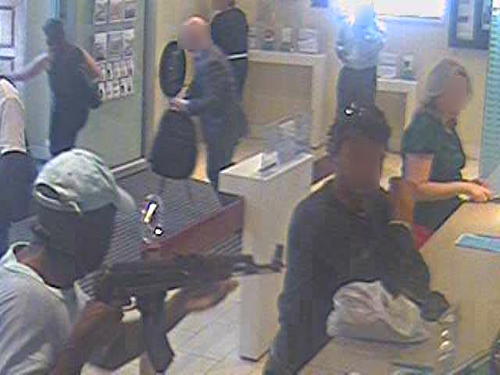 30-year-old Al-Fodday Fofanah of Ford Open Prison pleaded guilty at Woolwich Crown Court in January to two counts of attempted armed robbery, two counts of possession of an imitation firearm and escape from custody after his attempts to rob Barclays Bank in Borough High Street last July were dramatically foiled.

Last week he was sentenced to nine and a half years in prison.

"I welcome the sentence that has been handed down," said Detective Chief Inspector Paul Johnson of the Flying Squad.

"Fofanah will now serve a significant sentence for causing fear and panic to those who worked or had visited the bank.

"A number of people assisted with detaining Fofanah following the attempted armed robbery and without their help there is every possibility that he may have got away.

"I would like to thank the members of the public who demonstrated an enormous amount of bravery in confronting Fofanah especially those who showed little fear in tackling him to the ground and keeping hold of him until police arrived.

"Fofanah has now admitted that he was responsible for not only this but another attempted robbery and I hope that this sentence acts as a deterrent."

The men who helped to catch Fofanah were all recommended for a Commissioner's Commendation and received their certificates during a special ceremony at New Scotland Yard in January.