Southwark Cathedral's Choral Eucharist on Sunday was preceded by the blessing of palm branches and reading of the Gospel in Borough Market. 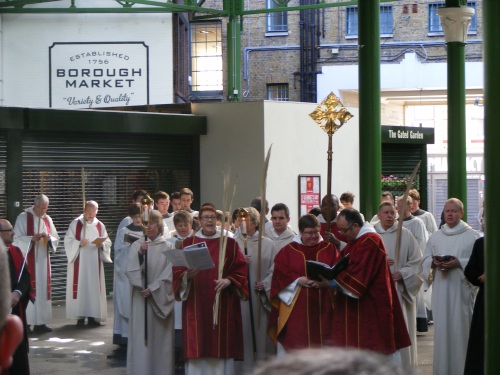 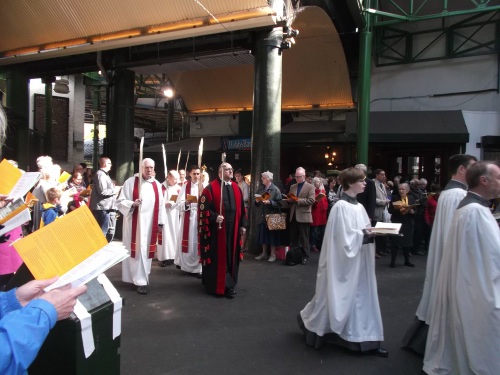 Procession and congregation in Borough Market 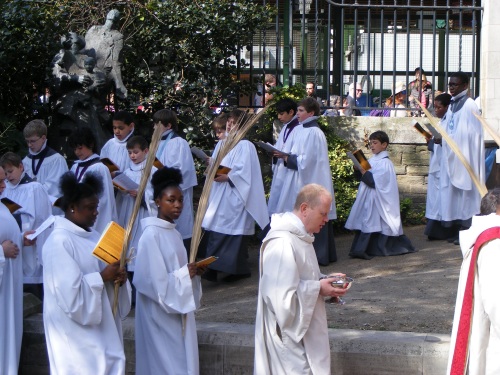 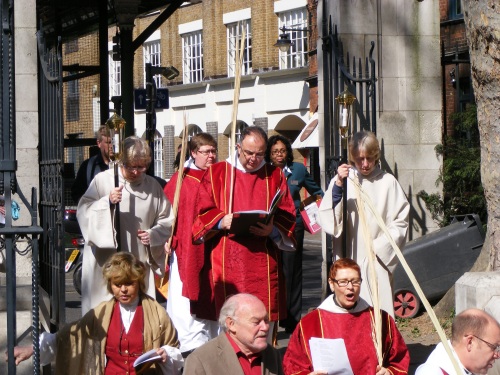 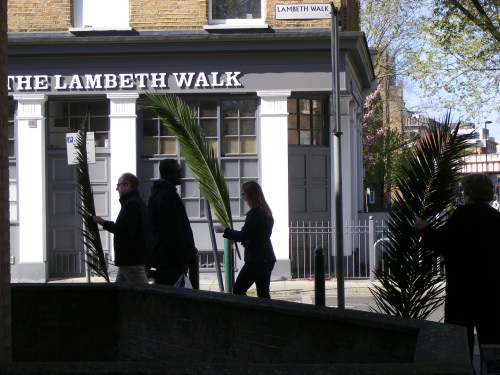 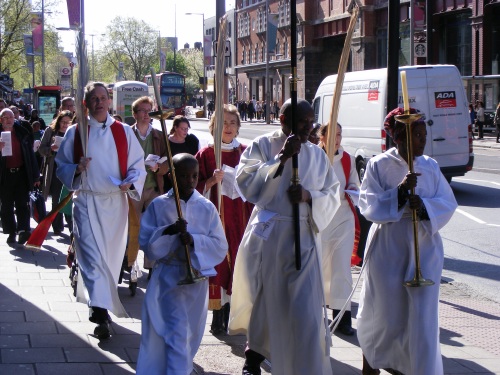 Palm processions, marking the start of Holy Week, recall Christ's two mile ride on a donkey from Bethany to Jerusalem where he was to be crucified five days later. His supporters waved palm branches in his honour as he approached the city gates.

Sunday morning's procession, led by the choir, assembled in Three Crown Square and reached the cathedral in bright sunshine by way of Borough High Street, Bedale Street and Cathedral Street.

Meanwhile the Archbishop of Southwark, The Most Revd Peter Smith, presided at the Blessing of Palms in the Amigo Hall before the procession into St George's Roman Catholic Cathedral.

Nearby Lambeth Mission & St Mary's started its procession in Lambeth Road to make its way to St Anselm's in Kennington by way of Lambeth Walk. Several people brought tambourines after an appeal to make the procession joyful as portrayed in the Bible.

At St John's Waterloo, the procession came across the borough boundary from Christ Church in Blackfriars Road.

For the first time Southwark Cathedral's Holy Week will climax with a dawn Vigil on Easter morning. Christians relive events in real time during Holy Week and it was early on Sunday that Jesus' tomb was reported to be empty.

The ancient service will begin outdoors at 5am with the lighting of the Easter Fire from which will be taken a flame to light the 'Easter' candle.

As the large Pascal candle, representing the risen Christ, is carried into the cathedral there will be a spreading of the light as people light their own candle. After Old Testament readings putting the resurrection in historical context, the singing of the litany and renewal of baptismal vows, the first Eucharist of Easter will be celebrated at sunrise.

In Waterloo there will be Dawn Mass and Easter Breakfast starting at 5.30am at St Andrew’s in Short Street. In Bermondsey St Mary Magdalen is holding a Sunrise Service in the churchyard opposite Bermondsey Square at 5.45am followed by breakfast.