Oh My Sweet Land at the Young Vic

A brutally honest, yet sensitive personal perspective on the war in Syria. 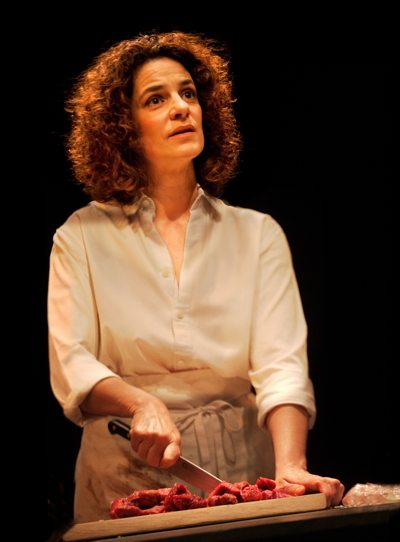 Half Syrian, half German, Corinne Jaber's perspective – and creative output – is inevitably coloured by the fact that she has never lived in the country that is now devastated by war. 'Oh My Sweet Land' is the result of the challenge of conceiving a play with limited direct experience of its subject, a subject that is now so futile and filled with almost unspeakable horrors.

Jaber and her writer and director Amir Nizar Zuabi build an intimate and honest relationship with the audience. We are invited into Corinne Jaber's home, her western kitchen, where she begins to recount the story of her journey to Syria through blunt honesty and a dry sense of humour. Whilst she does this, she starts to cook kubah, a classic Syrian dish, and the smells of fried onions and spices fill the theatre. Throughout the play Jaber is often distracted by her recollections so the dish is only completed as the play ends; as Jaber has said, no one feels like eating by this point.

Yet Oh My Sweet Land is in many ways uplifting. Jaber has stated that she wanted the play to be about the people of Syria, rather than the horror of the war. Whilst researching the play she travelled to Jordan and Lebanon to talk to refugees displaced by the war; some of their stories are recounted here. Inevitably, the horror and sense of futility seeps in but it is the people and lives described by Jaber that stand out; despite the devastation of war, Syria remains a country with a history and culture and its people remain defiant.