Vandalised Rothko painting goes back on show at Tate Modern

A painting by Mark Rothko which was damaged by a vandal at Tate Modern 18 months ago has been returned to public display. 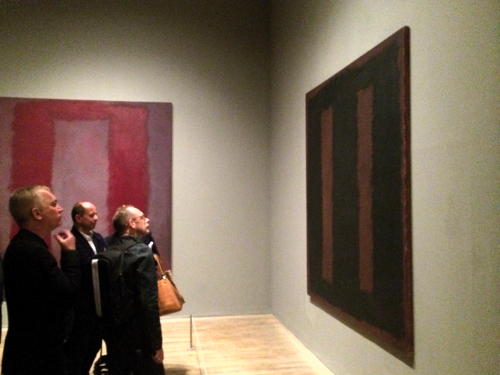 Wlodzimierz Umaniec was given a two-year jail sentence for defacing Mark Rothko’s Black on Maroon with graffiti ink on 7 October 2012.

Sentencing him in December that year, Recorder of Southwark Judge Roger Chapple said that it was "wholly and utterly unacceptable" for Umaniec to promote his yellowism movement by damaging an artwork.

The painting is one of the Seagram murals which Rothko donated to Tate in 1970.

“I am delighted that everyone can once again come to Tate Modern and see Rothko’s magnificent Black on Maroon," said Tate director Sir Nicholas Serota.

"Looking after its collection, Tate has a conservation team that is one of the best in the world. Their expertise, rigour, patient work and respect for the painting has enabled us to return it to public view, as envisaged by Mark Rothko.”

Sir Nicholas confirmed that a review of security had been carried out after the "appalling, sickening" attack but refused to comment on specific measures.

"It's important for us not to turn this into a Fort Knox," he said, adding that "this is a gallery not a prison".

Paintings conservator Rachel Barker, who spent nine months removing the ink from the painting, said: "To work on a Rothko is the highlight of any conservator's career."