Red Forest at the Young Vic

Belarus Free Theatre has created a play which is all anger and no narrative. 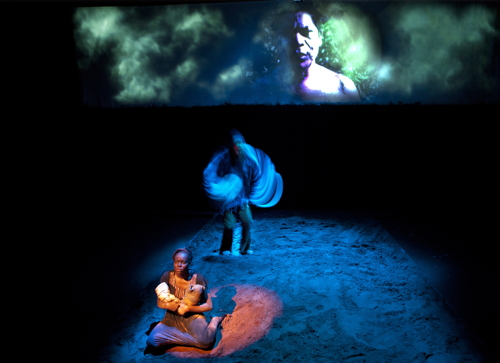 Belarus Free Theatre has built its reputation on fearlessly challenging authority and oppression. Defying threats, arrests and imprisonment, they continue to perform highly-charged political theatre underground in their homeland and openly across the globe. Their very existence and perseverance is in itself powerful and impactful, serving to remind audiences of the existence of this often overlooked European nation.

Red Forest turns their attention from political to environmental greed and ruin. It promises to be 'an epic new legend for the 21st century': a bold claim from any theatre company. As ever, they have created exciting and at times beautiful theatre. Each of the scenes, all set in troubled spots around the world, are ingeniously performed and highly evocative. The monsoon scene in particular, in which the actors slowly cross the water-drenched stage, is stunning.

Yet Red Forest consists of nothing more than scene after scene of wanton destruction and horror. It is unrelentingly bleak. Bar the overriding and simplistic theme of the cruelties of man and nature, the only link between these scenes is the (inexplicable) journey of a young black woman.

There is limited discussion of the causes of disasters that have befallen these people, bar Chernobyl. There is no sense of hope; there is no sense of purpose; only helplessness. And compounding this confusion is the occasional presence of an American Indian, whose scenes are reminiscent of Disney's Lion King accompanied by pan pipes.

The work of Belarus Free Theatre serves as a powerful reminder of the thousands of people across the world who defy oppression through creativity. But at times the theatre company appears too reliant on this symbolism, forgetting that art can speak louder than words.