A mass of thanksgiving has marked the retirement of Deacon James Sheahan from St George's Roman Catholic Cathedral. 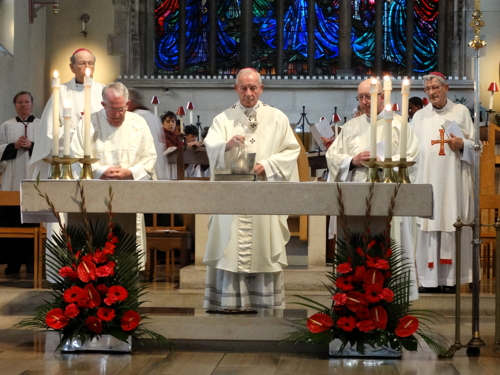 The Archbishop of Southwark, Most Revd Peter Smith, was the principal celebrant at Friday evening's mass. Photo courtesy of the Archdiocese of Southwark. 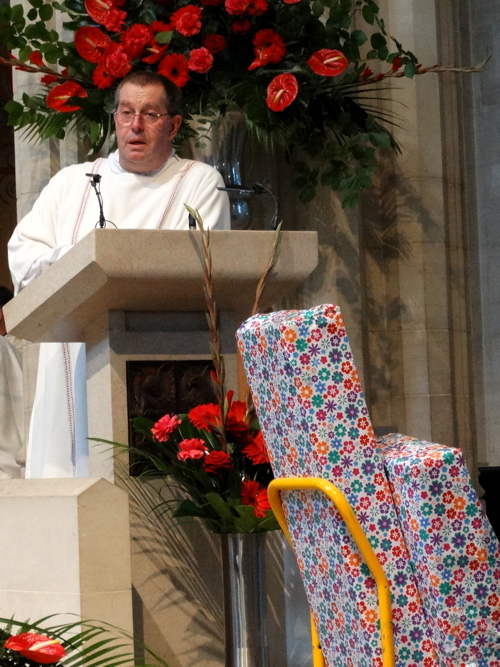 Revd James Sheahan addressed the congregation at the end of mass. Photo courtesy of the Archdiocese of Southwark.

'Deacon Jim', as he is known, has been associated with the cathedral for 45 years. He was first a server and for the last 21 years has been a permanent deacon and member of the clergy team.

The Archbishop of Southwark, the Most Revd Peter Smith, presided at the thanksgiving mass on Friday evening.

Assisting the Archbishop was his predecessor Archbishop Michael Bowen who had ordained James Sheahan to the diaconate and Bishop Howard Tripp who worked with him. The college of cathedral canons was present in the sanctuary to concelebrate, including former cathedral dean Monsignor James Cronin.

Archbishop Smith spoke of Deacon Jim's "devoted service" and noted that the day was the anniversary of the cathedral's opening in 1848 and reopening in 1958 following war damage.

"James has been here so long that he has probably baptised, married or buried somebody in your family," said Canon Pannett.

"He has been so much part of the institution of the cathedral parish that it will take a whole team of deacons to take his place."

Just before the blessing a trolley was wheeled into the nave carrying a hedge trimmer and a chainsaw. The presents reflected Jim's intention to be involved in horticulture when he returns to his family's home area in County Cork.

"When I came here in 1969 I did not think that I would be here in 2014," said Deacon Jim who recalled that since he arrived there had been five popes, five deans and four archbishops.