London Bridge is NOT falling down, Arizona tourism chiefs insist

The Sun says it "regrets any misunderstanding" after the tabloid's claims that the old London Bridge in Lake Havasu City could be demolished for luxury flats and a cannabis-themed tourist attraction caused outrage in Arizona. 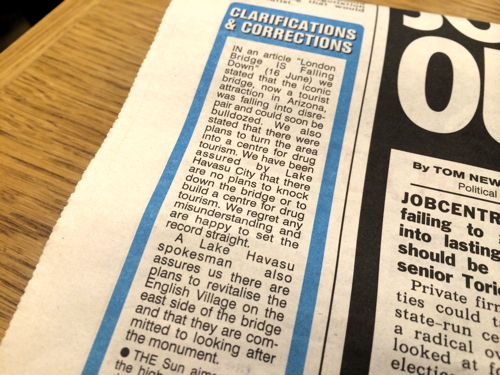 London Bridge was sold to American businessman Robert McCulloch in 1968 who rebuilt the structure as a tourist attraction in Lake Havasu City, Arizona.

On 16 June The Sun ran a report which claimed the bridge was in a state of disrepair and faced demolition to make way for luxury homes and a "drug haven" selling cannabis cigarettes and drugs paraphernalia.

This Monday the paper printed a correction on page 2 which noted that Lake Havasu City denies the claims and added: "We regret any misunderstanding and are happy to set the record straight."

The correction, brokered by The Sun's internal ombudsman Philippa Kennedy, fell short of the "immediate retraction and correction to be published on the front page" demanded by Doug Traub, president of the Lake Havasu City Convention & Visitors Bureau, in a furious letter to the paper's publishers.

Mr Traub said: "An article like this is a stain upon our honour.

"For over four decades we have been dedicated custodians of British history.

"We stand to lose millions of dollars in tourism revenue if our friends in the United Kingdom stay away out of spite.

"We are a small town and our hard-earned taxes pay for all of this upkeep. We can't afford a hit like this. It's just awful to us, a slap in the face."

Since the end of June the visitors bureau has been offering anyone with a UK passport, or anyone else with a confirmed air ticket to the UK in July or August, a thumbnail-sized piece of the bridge and a brochure about the historic structure.

The idea is to encourage travellers heading to the UK to testify that all is well with the bridge.

Doug Traub added: "The Sun story also says the bridge will be torn down to attract drug tourism. Last time we looked, this was illegal in Arizona."

The Lake Havasu City authorities were alerted to the story in The Sun by British-born local resident Sylvia Want who had been contacted by friends from home asking her if the claims were true.

Last week she was presented with a symbolic key to Lake Havasu City by Mayor Mark Nexsen and a proclamation honouring her part in defending the city's reputation.

"I am so honoured to receive this," she said during the event, according to the local Herald-News newspaper.

"You know, I'm disgusted with the tabloid — they just write anything to fill some space. I love this city; it is such a beautiful place."

The Sun's correction comes in the same week that the paper's editorial staff begin their relocation from Wapping to new offices at The News Building close to London Bridge.

• The story of the relocation of London Bridge to Arizona is told in Travis Elborough's book which was released in paperback earlier this year.