Nearly forty Edwardian motor cars were driven in procession from Chelsea Hospital to the Imperial War Museum on Monday to commemorate the start of the First World War a century ago. 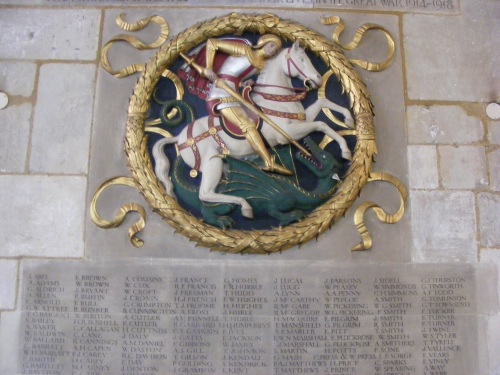 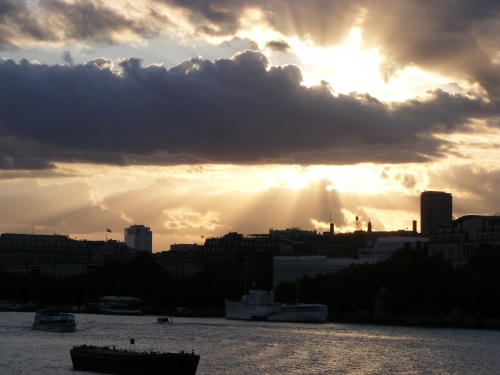 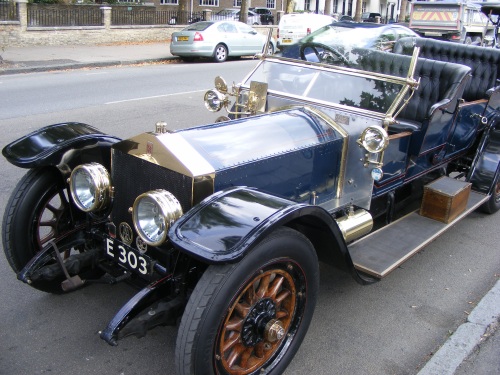 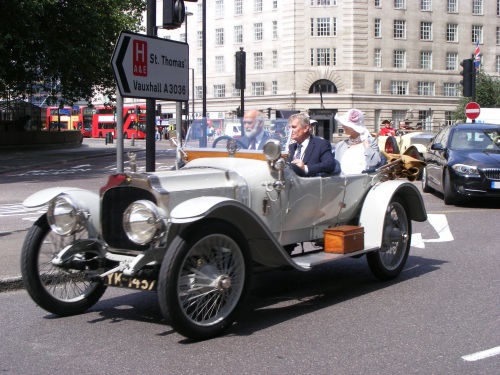 Prince Michael driving along Lambeth Palace Road to the Imperial War Museum. Princess Michael is in the back seat.

The vehicles were chosen for being familiar to people in 1914 although most commercial traffic was still horse-drawn.

Just five minutes after 11pm on 4 August 1914 a Rolls Royce delivered the hastily typed declaration of war to the German Embassy. War had officially begun at 11pm which was midnight in Berlin.

On Monday morning five Rolls Royce cars parked together in Lambeth Road. One was a dark blue 1911 Rolls Royce Silver Ghost which is believed to most resemble Foreign Secretary Edward Grey's Rolls Royce used to carry the document.

On Sunday evening Southwark Cathedral held a vigil service to commemorate the outbreak of war.

The Bishop of Southwark, the Rt Revd Christopher Chessun, opened the service by saying: "We gather in the light of Christ to recall the effects of human violence."

Being a hundred years to the night that Sir Edward Grey observed that the lamps were going out all over Europe, candles were slowly extinguished during the readings and hymns. After forty minutes just the Paschal candle, representing the light of Christ, remained lit.

The numbers attending proved larger than the cathedral had expected and service sheets had to be shared. Those present included the Mayor of Southwark Cllr Sunil Chopra and the Mayoress, Cathedrals ward councillor Adele Morris and former mayor Cllr Eliza Mann.

As the congregation left it was possible to see a sunset replicating the one witnessed at dusk by the Foreign Secretary and others in central London almost exactly hundred years ago that night.

Sunday's main Mass at St George's Roman Catholic Cathedral, which is opposite the Imperial War Museum, commemorated the start of the First World War with remembrance of those killed and injured and prayers for peace.

On Monday evening landmark buildings including Tower Bridge and Southwark Council's Tooley Street offices are due to be in darkness between 10pm and 11pm.

Cllr Ian Wingfield, deputy leader and cabinet member for communities, employment & business, said: "Marking the centenary of the First World War is an important milestone for the whole nation and Southwark will be showing its support in many ways, including by joining the 'Lights Out' campaign on Monday 4 August.

"I hope that this symbolic 'Lights Out' hour will also be another way for us to bring the community together as we remember the sacrifices of our armed forces and their families in wartime."

Simon Hughes, MP for Bermondsey and Old Southwark, said: "As we prepare for the centenary of World War One, we have a special opportunity in this borough to use the Imperial War Museum based in Southwark, one of the great memorials to the First World War.

"Both of my granddads served in the First World War. My father's father, Henry Hughes, served in the Royal Navy, and my mother's father, Albert Ward, was injured in the Battle of the Somme and severely gassed – leaving him with an injury that he wrestled with for the rest of his life.

"I am sure many Bermondsey and Southwark families will have parents, grandparents or great grandparents who served our country at home or abroad in one of the three armed services.

"It would be a huge contribution to the borough's history, if everybody made a real effort to feed in their family history to the Imperial War Museum this year starting this weekend.

"I look forward to joining with the community on the evening of 4 August to take part in the vigil, specifically to commemorate the day a hundred years ago when the 'war to end all wars' began after the troubles of southern Europe. The prediction then was that this would be a war which would 'see the lights go out all over Europe'. The vigil will remember that warning.

"There is no doubt that WWI was a dreadful global conflict. It would be a great legacy if remembering what happened 100 years ago made it less likely that wars would happen in our continent or anywhere in the world in the future."

The Imperial War Museum has launched a public initiative to try and build a better picture of the lives of the soldiers who served our country during the First World War.