The centenary of foreign secretary George Brown, born on 2 September 1914 just a month into the First World War, falls this year. 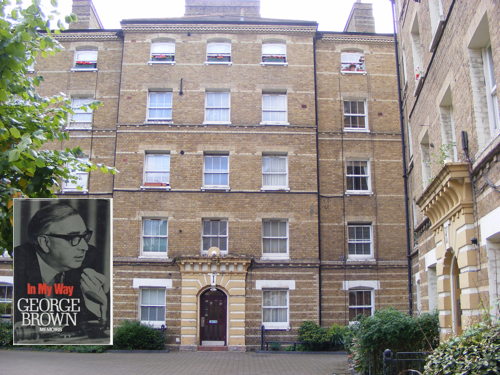 Block I at Waterloo's Peabody Estate where George Brown was born a century ago (inset: the cover of Brown's autobiography) 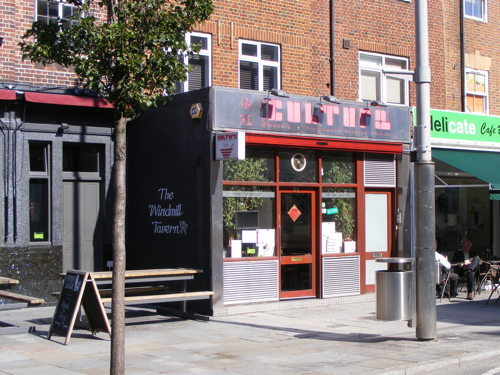 He was born a hundred years ago in Block I on the Duchy Street Peabody Estate off Stamford Street. The tiny flat was his maternal grandmother's house and after six months his parents were allotted their own flat in Peabody Square off Blackfriars Road.

After the War George's father was employed as a chauffeur at Pascall's sweet factory nearby at 100 Blackfriars Road on the corner of Valentine Place. Later he was a van driver for Lyons tea shops and George enjoyed travelling with his father delivering bread and cakes around central London.

Once a week his parents sent George out with an enamel plate and jug to get pies and green sauce from R Cooke's pie and mash shop in The Cut. He loved the parsley sauce more than the pie and later in life when married he would still go back to the shop and buy a pie for his grandmother.

It was at Gray Street that he volunteered to be choirboy at St Andrew-by-the-Wardrobe church at the north end of Blackfriars Bridge. Eventually he became a server and was often the thurifer, the person in charge of incense.

In Southwark he long remembered seeing the funeral procession of Cork Lord Mayor Terence MacSwiney, who had died on hunger strike in Brixton Prison, leaving St George's Cathedral in 1919. Brown knew so many Irish Londoners that he came to believe that his own family might have come from Ireland and for a long time attended Irish community dinners.

Experiencing his father being sacked by Lyons during the General Strike for bringing van drivers out on strike affected him badly. The boy hated having to go in his school uniform to the workhouse in Ufford Street (now part of the LeSoCo site) in order to collect a food allocation.

This experience drove sparked a desire to change society and increased his interest in the Labour Party. His first taste of campaigning was delivering leaflets near his paternal grandparents' home in King James Street. As George was growing up he would often look out from his Peabody block's communal wash area at night and see Big Ben with the light above the clock face indicating that MPs were still sitting.

He left school at the age of 15 to work in the City but attended evening classes at the Elephant & Castle. Shortly afterwards the family moved to Streatham.

George Brown entered Parliament in 1945, became deputy Labour leader in 1960 and was foreign secretary from 1966 to 1968. He was later created Baron George-Brown of Jevington. He died in 1985.