Plans to demolish the Royal Pharmaceutical Society HQ and replace it with a residential development have been approved by Lambeth Council's planning applications committee despite objections about loss of office space. 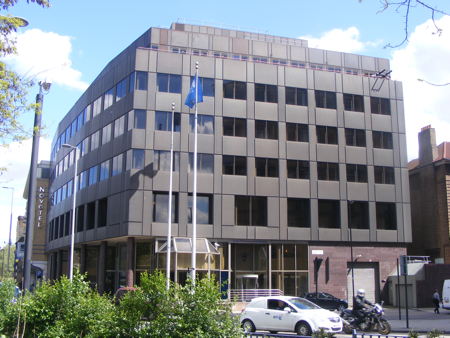 The proposed new eight-storey building – which has been designed by architects BDP for Lambeth Investments Ltd – will include 69 new homes.

The existing 1970 building, which includes a museum of rare pharmaceutical artefacts, stands on the corner of Lambeth Road and Lambeth High Street.

In 2010 the Society, which is moving to Wapping, lost its regulatory authority role to the newly formed General Pharmaceutical Council.

He said the council's own policy 23 protected offices except where sites were not suitable for employment, vacant or there was evidence of a lack of demand.

He queried why officers should state that policy 23 was not applicable in this case.

"The applicants say they marketed the property with no appropriate response," added Michael Ball.

"What they mean ... is that they advertised in Estates Gazette as freehold for sale with opportunities for redeveloping the site for alternative uses.

"Surprise, surprise they only got developers offering to redevelop the site. That is not how you market offices. You have to get out and find potential takers."

He claimed that the Waterloo-based Oasis charity would love the building to accommodate the offices of its national chain of academy schools.

"They have capital for a fit-out and a long-term commitment to Waterloo.

They want to contribute to our economy," he claimed.

"This is existing office stock in good condition. The site is within ten minutes of the centre of UK government which is why many organisations want to base themselves in the area."

Asked to the respond, the planning officer said that there was another overarching policy and that opportunity area planning framework promoted residential-led mixed use development.

There was provision for office or retail use on the ground floor of the development.

Given the bespoke nature of the present building it would not be viable to bring it into continued office use.

Objections to the development were also received from residents of next door Eustace House who have lived there for many years and in one case for forty years.

The developers told the meeting that there had been no objections from Parliament View on the opposite side of Lambeth High Street.

The development is expected to start next year with completion due in 2017.