Golem at the Young Vic

Deeply serious yet profoundly silly, this is quite unlike anything else you will see on stage. 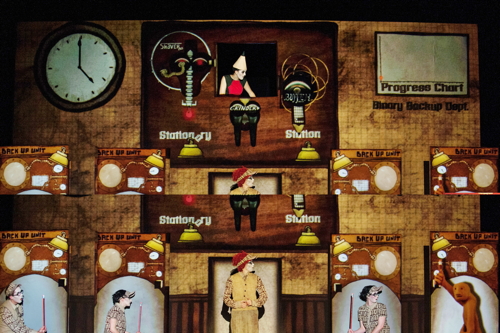 Golem is not easy to describe. A blend of Belleville Rendezvous and a Tim Burton animated film springs to mind. But this does not do justice to Golem's own uniqueness and wit which brilliantly blends huge animations with live performance and music, creating a strange fantasy world parallel to our own.

The golem in question is purchased by a young man who brings it home to meet and live with his sister and grandmother. All appears to go well at first, yet the more time that they spend with Golem, the more he acquires human intelligence and the more his control over the family becomes intrusive and disturbing.

It is apt then that only a few weeks before Golem opened at the Young Vic, Stephen Hawking warned of the threat posed by artificial intelligence. He suggested that machines which are designed to think for themselves could ultimately re-design themselves and become uncontrollable. The original concept of an animated anamorphic creature, a golem, derives from old Jewish folklore; yet in this age of technological development and information overload, the themes of Golem resonate. Not only does Golem tell others what to say, what to wear, who to date, he needs to be constantly upgraded to the latest version, each of which is more controlling than the last.

Despite these deep and provocative themes Golem is ultimately very, very witty. The narrative is hilarious and the cast of misfit characters endearing. To be able to perform and move in time with the animations takes real skill and, presumably, many hours of practice. And it is beautiful, at times hypnotic, to watch.

What is most surprising of all about Golem is that he is not defeated; a rather sobering thought to be left with.