Victim stabbed in head with pen at Elephant & Castle pub

Police have applied to have the licence of the Elephant & Castle pub suspended after a customer was stabbed in the head with a pen. 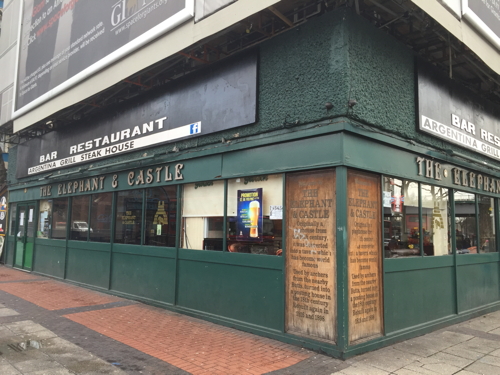 In their application for a review of the licence of the pub at the corner of New Kent Road and Newington Causeway, police say that a "serious assault" took place in the early hours of Thursday 29 January.

"The suspect for this crime stabbed the victim in the temple with a pen using such force that the pen embedded into the victim's head and remained there until being removed by staff at the hospital.

"The victim required stitches to the head as a result of this injury.

"A crime report has been created for this incident and has been classified as a GBH with intent."

The pub is currently licenced until 2am on Wednesday night/Thursday morning but police claim that during their investigation they have found that the pub was selling alcohol beyond this time.

"The management of the premises provided a signed statement to the police that clearly contradicts the evidence witnessed by the police when viewing the CCTV.

"In my opinion this was a clear attempt to conceal the fact that the premises were operating in breach of the premises licence and behaviour that falls well short of the standard one would expect from a responsible operator," said the police superintendent who signed the application papers.

The application also details another incident at the pub on 19 December last year "where all parties were reported as extremely intoxicated, the victim was punched to the ground unconscious and kicked whilst on the ground causing injuries consistent with grievous bodily harm".

In the letter Mr Anene acknowledges his responsibility for what goes on in the venue but notes that he has been unable to ensure the safe running of the pub "due to my absence most of the days".