Pupils from two SE1 primary schools have taken part in a project to create a mythical creatures patchwork quilt, which will be auctioned off for charity later this year. 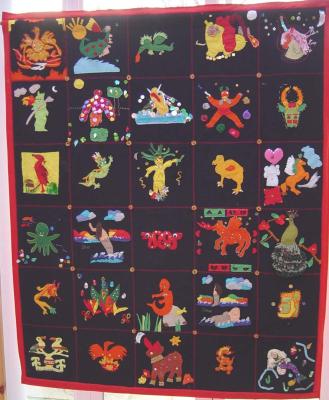 The project, part of the Excellence in Cities (EiC) Gifted and Talented initiative, brought together thirteen schools in the borough – including Joseph Lancaster and Eveline Lowe – to produce the 5ftx6ft quilt. Children from each school designed and stitched their own
patchwork square, and quilter Wendy Parke put together all 30 squares to make the final product.

The quilt will go on display at the Livesey Museum on 3 February from
4pm to 6pm, before going on loan to each of the schools involved in the project. The quilt will then be auctioned for charity.

Pauline Hinchliffe, Southwark EiC Gifted and Talented co-ordinator, said: "This is one of the many projects run for primary and secondary pupils as part of the Gifted and Talented initiative in Southwark. Although I have been working with able pupils for a number of years, I never cease to be amazed by the high standards of work they produce when they are given a sufficient level of challenge. This project is an excellent example of this in practice and the children should be very proud of the work they have produced."