Police have released a CCTV image of a man they would like to speak to in connection with a collision in Tower Bridge Road that left a woman with facial injuries. 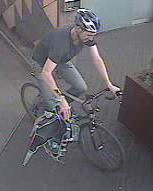 Andrea McVeigh posted on the SE1 forum last week to describe what happened when she and her husband crossed Tower Bridge Road near the Abbey Street junction at about 6pm on Tuesday 14 April.

As they stepped onto the pavement on the western side of the road, a cyclist who was on the pavement collided with Ms McVeigh causing her to fall.

Ms McVeigh suffered significant facial injuries. She was taken to St Thomas' Hospital by ambulance and remained there for nine hours.

The cyclist rode away through Bermondsey Square before the police and ambulance service came to the scene.

Earlier this week Ms McVeigh took part in a live Twitter chat hosted by Southwark borough police commander Ch Supt Zander Gibson and asked them to release a CCTV image of a man that officers believe may be able to assist with this investigation.

On Friday Southwark Police launched an appeal to find the man.

"We are keen to trace the man pictured in the image," said Sgt David Hunt from Southwark Police.

"The victim sustained significant facial injuries and If not for her husband and a member of the public stopping to help she would have been left on that footpath.

"I would encourage anyone who recognises him to contact us immediately."

Ch Supt Gibson said: "On Monday this incident was brought to my attention during a Twitter chat.

"It must have been an awful encounter for the victim, both physically and emotionally and she has my heartfelt sympathy for what she went through.

"We sent an officer to the scene and they completed an investigation.

"There was a delay in following this investigation up but I am confident we are now taking appropriate steps to identify the person responsible.

"The vast majority of cyclists are decent honest hardworking people but in this case I think the person responsible for knocking the victim over needs to explain their actions to us.

"I'd encourage them to get in touch at the earliest opportunity."