Ah, Wilderness! at the Young Vic

Ah, Wilderness! is humorous but curious in its modernity and ultimately lacks impact. 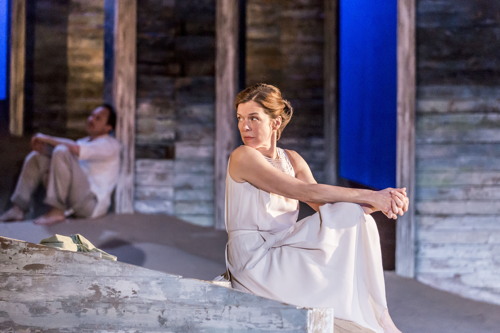 Am I alone in knowing of Eugene O'Neill's reputation, but little of his work? 'Ah, Wilderness!' is – I am informed – a rare work of comedy amongst O'Neill's body of otherwise dark and tragic work. This comedy shines through, with numerous moments of laugh-out-loud humour throughout the play. Yet a lack of shade is perhaps its flaw; you keep waiting for some darkness amongst the light, yet find little.

O'Neill's play, written in 1933 but set in 1906, harks back to a more innocent America, but an America on the cusp of change. It is 4th July, then as is now, a day for celebrations and family. The focus is Richard Miller – or Dick – who is coming of age just as America also reaches adulthood. Dick embodies this change, challenging received wisdom and paternal authority. His mother is concerned that – like so many teenagers after him – he is reading subversive texts; in Dick's case, Shaw, Ibsen and Wilde. He mopes about, pronouncing such memorable lines as "life's all a stupid farce – I'm through with it" and "I'm proud to be a cynic". It is all very endearing and amusing.

On the evening of 4th July 1906, Richard is given a lesson in life. Yet it is a lesson without consequences; nothing changes as a result. Where is the purpose, the drama? The only blemishes on an otherwise privileged and unspoilt life are Richard's alcoholic, wayward uncle and his spinster aunt. The two characters appear, on reflection, to have been created simply to threaten to spoil the idyllic summer.

George Mackay as Richard is styled in an incongruously modern outfit and at times acts too much like a modern teen, tossing his lengthy hair. But Mackay provides a powerful and convincing performance. Janie Dee as Essie Miller, Richard's mother, is also notable. And, as ever with the Young Vic, the set – sun-bleached wood and seemingly never-ending undulations of sand – can be considered a star in itself.

All of Eugene O'Neill's work is in some form autobiographical. And this play is emblematic of the upbringing he never had; he lived a peripatetic life with a largely absent father and a mother who was addicted to morphine as a result of Eugene's birth. The darkness may not be visible but it is present. And to be able to see it, you need to understand a little about the man who wrote it.