World’s media descend on Southwark and Lambeth to cover election

TV channels from around the world are covering the general election from the South Bank, Bankside and London Bridge. 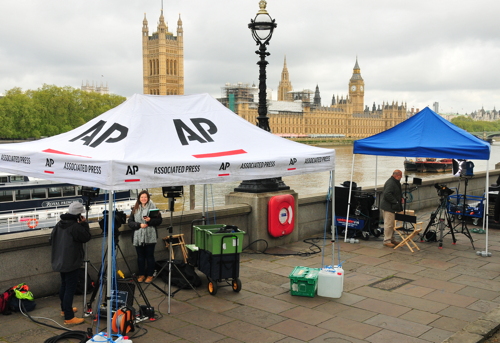 FilmFixer, which handles licensing for TV and film crews on behalf of both Southwark and Lambeth councils, is hosting election teams from local, national and international broadcasters.

The Lambeth position on the Albert Embankment features the Houses of Parliament as a backdrop.

Over at Potters Fields Park channels can choose to have City Hall, Tower Bridge and the Tower of London in shot.

At Bankside, TV coverage can have St Paul's Cathedral in the background.

FilmFixer is also handling arrangements for TV crews at Southwark Council's Tooley Street HQ where the election counts for both Bermondsey & Old Southwark and Camberwell & Peckham will be held.

"This part of London will come alive with election coverage on 7 May, with crews in position from early in the morning, swelling dramatically for the lunchtime news bulletins and onwards," said FilmFixer's Andrew Pavord.

"Some will be filming over a three-day period, from the anticipation right through to the outcome.

"We're expecting crews at the Southwark Council offices in particular to pull an all-nighter for the count.

"The media is already describing this election as the closest and most unpredictable in memory, and we're looking forward to being in the centre of the action."

Across Southwark and Lambeth, FilmFixer will be hosting crews including ITV News, BBC national and regional news and Channel 4 News, along with AP, France 24, Denmark's TV2 and many others.

Mr Pavord added: "It's a complicated permitting set up, with power being provided for crews on Potters Fields Park, limited parking for satellite trucks near Albert Embankment, negotiations with neighbouring stakeholders at Bankside, and many other issues to deal with.

"We're looking forward to helping the world's media get the best views of London on this important occasion.

"Following the crush of needs we met for London's Olympics in 2012, our team is well rehearsed for big events like this."

Location manager Mark Howell is organising positions on behalf of many international crews. He said: "The riverside is London's shop window – it's the ideal place to be for events such as this.

"I'm grateful an organisation like FilmFixer is able to negotiate across all the stakeholders to make these locations available."