A London Bridge ticket inspector who managed to overpower and disarm a man threatening to stab passengers has been recognised for his bravery by British Transport Police. 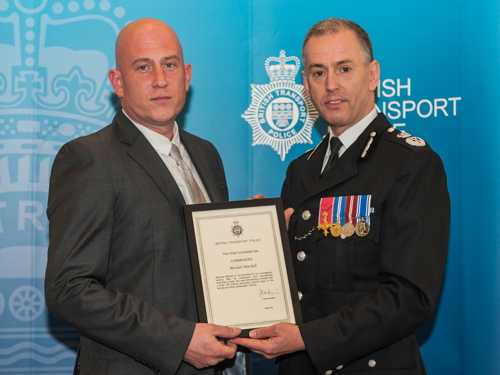 40-year-old Michael Mitchell from Downham, south east London, was presented with a Chief Constable's Commendation on Thursday 7 May.

The annual BTP awards ceremony heard how Mr Mitchell was on duty when the incident unfolded during the evening rush hour at London Bridge Station on Friday 20 June 2014.

Mr Mitchell explained: "I was stood checking tickets at the barriers when a woman ran in, screaming that there was a man outside with a knife.

"I ran out into the street and saw this man clutching a knife and threatening a woman. I immediately ran up to him, got the woman out of the way and told him to drop the knife.

"I must have shouted at him three or four times but he was out of it, muttering under his breath and with glazed eyes.

"The area was really crowded with rush-hour traffic and a mother and young children were walking close by.

"I knew I had to act before he seriously hurt someone. I ran at him, managed to overpower him and bring him to the ground.

"I restrained him and got the knife off him, until BTP officers arrived."

"I've no doubt that his actions prevented serious injury to the lady and other members of the public. Michael went far beyond what anyone would have expected of him. I am delighted to take this opportunity to personally thank him for this act of Pure selfless courage."

Michael Mitchell added: "I couldn't ignore what was happening. I couldn't live with myself if he'd stabbed someone in the street and I hadn't tried to prevent it.

"When I saw there were young children in the area, I knew I had to disarm him. My own safety never even came into my mind – all the rules just went out the window. I did what I thought was right."

David Statham, managing director of Southeastern, said: "We are incredibly proud of the extreme bravery and courage Michael showed in very testing circumstances.

"Michael acted selflessly for the safety of others around him and I am very pleased he has been commended by the Chief Constable for his heroic actions."