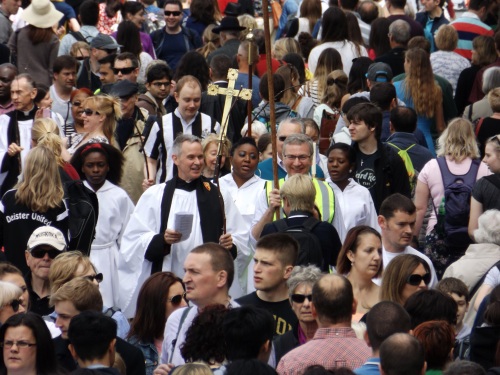 Canon Giles Goddard leads the procession along the riverside 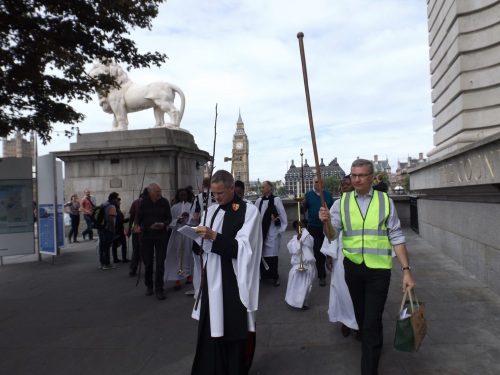 The head of the procession arrives at County Hall 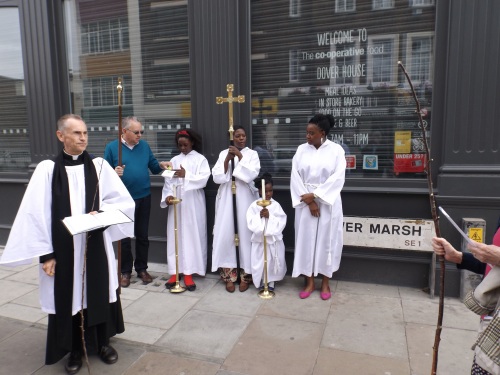 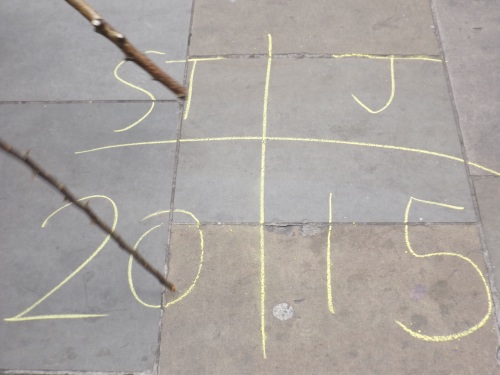 Beating the marker outside the Co-op

Early on Sunday morning an advance party set out from the church to begin the task by going to the south end of the parish around St George's Circus.

The group arrived back at the church in time for the Pentecost Sunday Mass celebrated on the lawn outside.

But during the service there was a break for the circling of the parish to be completed by everybody present. Staves were handed out as the procession formed.

The custom requires several stops for prayer and, where there is no stone, the chalking of a marker on the ground. Afterwards walkers beat the ground with staves to mark the boundary in memory. The custom is also associated with symbolically waking up the ground for good crops.

The St John's procession paused twice by the River Thames where the boundary runs along the middle of the water. At Waterloo Bridge prayers were said for the RNLI life boat crews and at Jubilee Gardens it was the turn of the South Bank's creative artists to be remembered.

There were further halts at County Hall and in Westmister Bridge Road.

At the end of Lower Marsh a prayer was said in front of the locked doors of the Co-operative supermarket. The Co-op has not responded to enquiries about the new half-stocked store which has remained closed for almost six months.

Standing in front of the opening times sign, the following prayer was led by curate Jeffrey Risbridger:

"Protect and bless all businesses within our parish, that they may thrive and provide a living and employment to many."

Some walkers had been sponsored to raise funds for the local Robes Project homeless charity and the Ugandan farm and Sunday school supported by the Waterloo congregation.

On returning to St John's to complete the service on the lawn, vicar Canon Giles Goddard pointed to the church's outside south wall which carries the words of 17th-century poet and priest George Herbert. He promoted the beating the parish bounds tradition which he described as "neighbourly accompanying one another with reconciling differences".