Detectives have launched an appeal for help to trace a man thought to have been involved in the brutal murder of Chris Foster in Borough High Street in 2013. 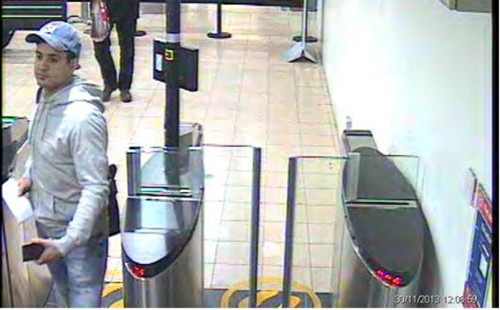 They have released a CCTV image of him at Heathrow Airport on his way out of the UK.

The new police appeal comes as the case was featured on the BBC documentary series The Met.

Chris was stabbed to death in Borough High Street in November 2013 while enjoying a drink with friends in a failed revenge attack.

34-year-old Aytach Lisani of Brentwood is serving a life sentence for murder with a minimum of 23 years in prison.

Billy Dove, 31, was jailed for six years and six months after admitting conspiracy to cause grievous bodily harm.

39-year-old Ali Lisani (brother of Aytach Lisani) of Basildon was sentenced to seven years and six months' imprisonment for conspiracy to cause GBH.

Rocky Djelal, 35, also admitted conspiracy to cause GBH and was jailed for six years.

Aydin Salih, 33, remains wanted. He has family connections to the Greenwich and Bermondsey areas.

"Aydin Salih was named in court as being involved in the murder of Chris and enquiries continue to trace him," said Detective Chief Inspector Ken Hughes.

"It is believed he fled to Northern Cyprus immediately after the murder but he may have since moved on. He has family in the UK, including a child, and it seems likely he would have maintained his connections to this country.

"We are appealing for anyone with information that could help our enquiries to come forward and speak to us confidentially.

"Chris was an entirely innocent party and a hard-working father who paid with his life for the fatal mistake made by Aytach Lisani and his group."

On the evening of Friday, 29 November 2013 Chris Foster was standing with a friend in an alleyway outside the St Christopher's Inn pub on Borough High Street.

The pair were enjoying a last drink outside after an evening with friends visiting various pubs.

A group of men, including some of the defendants, suddenly appeared. Their faces were hidden by hoods and scarves and at least one had a bat and another a knife.

Chris was stabbed once from behind in the back.

He managed to get inside the pub where he collapsed to the floor. He died 90 minutes later at the Royal London Hospital.

Chris, from Southwark, worked in administration for a firm of lawyers and was father to a four-year-old girl.

The court heard the defendants had mistaken Chris for another man, who was in the same area that evening and was suspected weeks earlier of slashing the face of a relative of the Lisani brothers.

Mobile phone records showed Dove had seen the man in an alleyway next to another pub close to St Christopher's Inn that night and then called the Lisanis' cousin.

The cousin immediately called Aytach Lisani, sparking a series of phone calls between the defendants.

At 11.31pm CCTV footage captured the group meeting in Borough High Street then congregating at one end of the alleyway before walking down. They were described as being "pumped-up" and ready to cause trouble.

Aytach Lisani admitted stabbing Chris – believing him to be the other man.

Various witnesses in the area saw the defendants and described one as carrying a knife with a long thin blade 10-14 inches long. CCTV showed Aytach Lisani was responsible.

Following the murder Aytach Lasini drove to Brentwood and the others also dispersed.

CCTV footage, witness accounts and mobile phone analysis identified each of the defendants and they were subsequently arrested and charged.

As well as Aydin Salih, a second unidentified man who was part of the group remains outstanding.

Chris's mum Jean Foster said on behalf of his family: "Chris was a totally innocent victim.

"Our loss is immense but nothing compared to the loss of the only parent Christina knew and whom she loved dearly. She will have to endure a lifetime of upset and anguish at the way her father was taken from her.

"Only when all involved have been put before a court to explain their part and brought to justice can we as a family start moving forward with our lives. If anyone has any information on the two remaining suspects we urge them to please come forward.

"More than anyone else Christina needs your help in getting justice for her daddy.

"The family are sincerely grateful to those that have assisted with the investigation so far and would like to thank them."