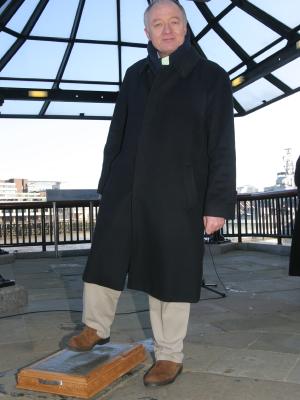 The Mayor took a short walk from his City Hall headquarters to unveil a panoramic viewing panel on the riverside walkway and make a commemorative slab using his footprints.

The Jubilee Walkway is one of the capital's premier walking trails and one of London's six designated Strategic Routes identified in the Mayor's Transport Strategy.

The Walkway was first developed for The Queen's Silver Jubilee in 1977 and The Jubilee Walkway Trust was then set up in 1978 as a charity to look after its interest in partnership with strategic and local authorities. The walkway has recently been extended and completed to mark the Queen's Golden Jubilee celebrations in 2003 with a funding grant provided by Transport for London.

The London Walking Plan aims to encourage more people to walk short journeys and make trips over longer distances by a combination of walking and public transport.

Walking has declined by up to 20% in parts of London over the last decade. This has had a detrimental effect on the health and welfare of both individuals and communities, as well as adding to the problem of congestion within the city. If London is to continue to grow and prosper it's important that this trend is reversed.

"Making London an easier city to walk around will undoubtedly help to achieve both a better city to live in and a more prosperous economy" said Ken Livingstone.

"I'm delighted the Walking Plan has now been published and am confident that, with the continued support of Government, Transport for London can build on the capital's fantastic potential to become a truly world class city for pedestrians by 2015."