Southwark Council has marked its first 50 years with a civic celebration at Southwark Cathedral hosted by Mayor of Southwark Cllr Dora Dixon-Fyle. 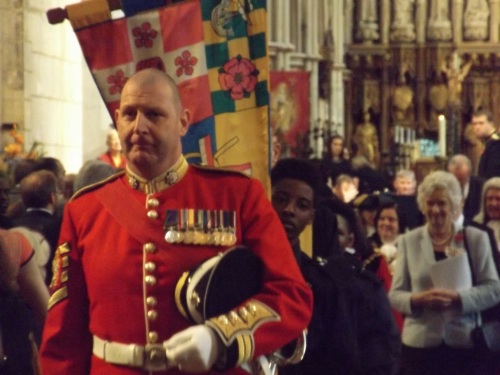 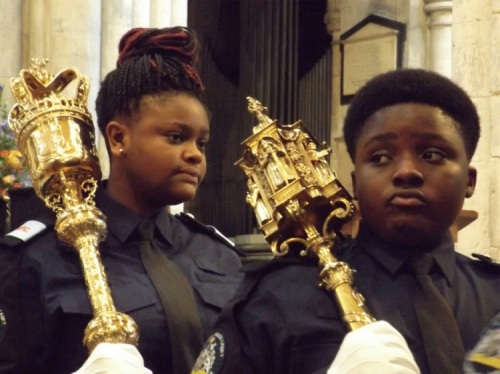 Police cadets carried the maces of the old boroughs of Bermondsey, Camberwell and Southwark

The Dean of Southwark, the Very Revd Andrew Nunn, writing in the souvenir programme, said: "I have been in Southwark only 20 years and in that time I have seen a huge transformation, regeneration and development.

"From being somewhere off the beaten track, the riverside part of the borough is at the heart of the vibrant city."

In his welcome on Saturday morning, the Dean said: "Christians may look to another heavenly city but we are totally committed to this city and to this community." He also spoke of the present challenge of maintaining an affordable housing stock and mixed communities when the pressure on some to move was so great.

Harriet Harman MP also spoke of the "madness of the housing crisis" whilst reflecting on her good fortune to live in the borough with Guy's as the maternity hospital.

Reflections on fifty years were offered by Southwark's former MP Sir Simon Hughes who claimed that his greatest predecessor was Alfred Salter.

Tina Johnston spoke as a resident working at Blackfriars Settlement enjoying being a member of the wider community meeting older and sometimes isolated people.

Former mayor Sam King looked back more than fifty years to his arrival from Jamaica in 1948.

Speaking as the tenth council leader, Peter John said that in fifty years Southwark was now recognised as being at the heart of central London. The Elephant & Castle shopping centre which was new in 1965 was now about to be renewed.

"We are just the best place in the world."

The combined bands of the Army Medical Services (AMS) and 150 Regiment Royal Logistic Corps, under the conductor Captain Paul Jackson, provided the music.

The event ended with a surprise performance of dance and music by Kinetika Bloco who preceded the civic procession out of the cathedral and into the courtyard.