A mosaic of 1001 black and white images 'defining the distinctive creative character of London' has gone on show. 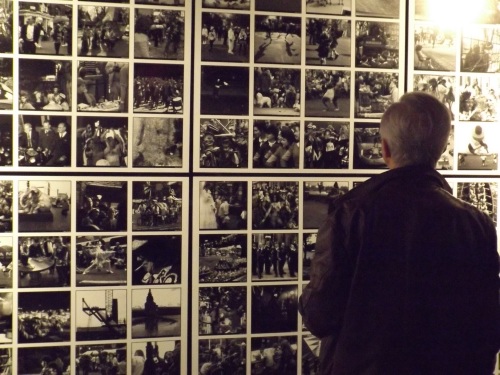 The 1001 Days in London exhibition is at new arts venue Platform Southwark in Joan Street behind Southwark Station.

The photographer is Steve Hollingshead, well-known for his black and white photo calendar, whose mass display of square images reflect the first fifteen years of this century.

Each square, in what is described as a 'tiled chamber', is identified by date alone. Some visitors will recognise a special event or annual tradition in SE1.

Sheep are shown on the Millennium Bridge along with the annual run by freemen of the City of London on London Bridge. The bridge in January is also the scene of the annual blessing of the river and Steve has caught the moment the cross is hurled into the water below.

The week before he records the Holly Man's Twelfth Day appearance on Bankside.

It's interesting to note that the city centre boroughs offer so much variety. The Lord Mayor's Show is full of opportunities. Westminster has the annual Judges' Procession which takes place outside the Houses of Parliament whilst MPs are away at the party conferences. Earlier in the year there is the riverside Parliamentary Pancake Race. One of Steve's photos catches Vince Cable running with a frying pan.

Just across Southwark Bridge, the Vintners walk in procession led by a wine porter with a broom.

Beating the Bounds offers endless opportunities as do church services from the Clown Service in Dalston to Horseman's Sunday in Bayswater. The vicar of St John's Hyde Park Crescent has to be willing to ride a horse once a year.

This record needs commitment for Steve has a packed and complicated diary sometimes requiring a very early start. Egg rolling down Fleet Street follows the 5.30am Easter Vigil.

Steve tries neither to block the view nor become part of the event. Some events are fun. Tradition is serious. But everyone at all the events whether ancient, new, instant or one-off seems happy to be there.

There is also a reminder of what we have lost this century: the annual and hugely popular Strawberrie Fayre in Ely Place, where Shakespeare saw strawberries growing, was held for the last time in 2006.

1001 Days in London is the launch of a visual project that will develop over the next three years expanding the exploration of the spirit of London. Visitors can support the 1001 Days project by purchasing blind a unique copy of one of the displayed images.