British Transport Police officers have released an image of a man they wish to speak to following an incident at London Bridge Underground Station. 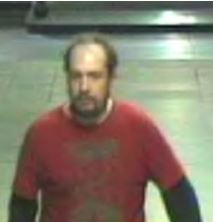 Do you recognise this man?

The incident happened at 2pm on Friday 10 April.

The man re-dressed himself and boarded a southbound train.

PC Leslie Dunnett said: "I'd like to speak to the man in the CCTV image as I believe he may have vital information which could help with the investigation.

"People have the right to travel on the rail network without being made to feel uncomfortable or intimidated.