&quot;It is about time you stood up for law and order&quot;. That&#39;s the harsh message for Simon Hughes from residents of riverside apartments in Bermondsey, angered by the MP&#39;s support for the floating community at Downings Road moorings. 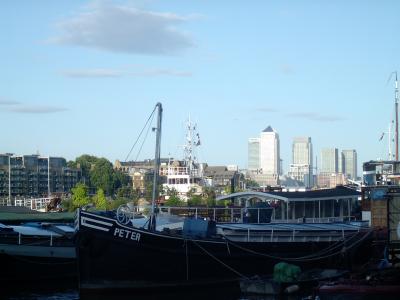 The barge community pictured in July 2003

Last week we reported the adjournment of an inquiry at Bankside House pending Southwark's decision on a planning application to formalise the status of the barge community.

North Southwark and Bermondsey MP Simon Hughes welcomed the adjournment, saying: "Today has shown that breadth of support for moorings on the river and widespread agreement about the sensible way forward. I will continue to play an active part in getting a satisfactory outcome on this important issue to ensure a vibrant future for the Thames."

The extent of the support for the floating community is fiercely contested by residents of the riverside apartments which overlook the moorings. In a letter to the MP, they are dismissive of the petition organised by the barge-dwellers: "the majority of signatures are from outside Southwark and are not affected either way by the barges – they were obtained by canvassing friends and colleagues."

The letter continues: "The issue is that these barges are there illegally – if they were "travellers" in a village they would be evicted – this is no different. It is about time you stood up for law and order and not remain on the fence. I am sure if they were at the bottom of your garden you would feel differently – another case by a politician of NIMBYism!"

The letter is from a group of residents living in China, Creeds, Tower, Springalls and Riverview Heights
Wharf, who have complained of noise, smells and loss of privacy due to the presence of the barges.