Tower Bridge and the National Theatre were illuminated on Wednesday night in the colours of the Belgian flag as a mark of tribute to the victims of this week's terrorist attacks. 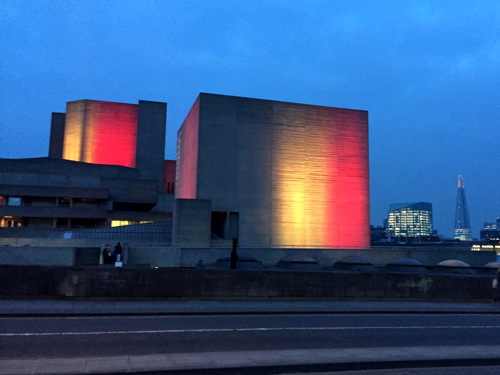 The flytowers of the National Theatre

Jeffrey Mountevans, the Lord Mayor of London, said: "Our thoughts and prayers are with the people of Brussels.

"Flags will be flying at half-mast across the City of London at Tower Bridge, Guildhall, The Mansion House, and Old Bailey. London stands shoulder to shoulder with the victims and their families."

At City Hall the Belgian flag and Union flag were flown at half-mast.

The Mayor of London, Boris Johnson, said: "The scenes in Belgium were truly appalling and it is important we pay tribute to the victims, as well as show our solidarity with the people of Brussels.

"They have the sympathy of every Londoner and our thoughts will be with them as they do their best to recover from this despicable atrocity."

Jennette Arnold OBE AM, chair of the London Assembly, said: "We must send a clear signal that atrocities like the events in Brussels yesterday will be not be tolerated.

"When London lights up its landmarks, we are condemning terror and mindless acts of violence and standing side by side with Belgians in their tragic hour.

"We share their grief and we send London's love to a neighbouring city, that will recover with time. The awful actions of a few bring us closer together and stronger than we were before."