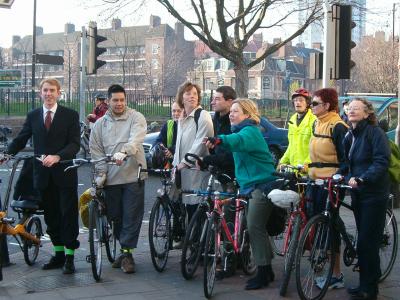 Jenny Jones (far right) with cyclists from Lambeth and Southwark

The cyclists claim that they have been left exposed to danger after the roundabout layout and its approaches were changed to give buses access to a new bus interchange in front of Waterloo Station.

Jenny Jones, a cyclist herself who negotiated the roundabout during rush hour traffic, said: "When we design roads and roundabouts, we have to design them for the safety of all road users, and that includes cyclists & pedestrians. More and more people are cycling . We must make it easy and safe."

Clare Neely from Lambeth Cyclists said: "Cyclists from the Lambeth and Southwark groups of the London Cycling Campaign are very disappointed that the lessons of Vauxhall Cross have not been learnt by Transport for London in the works to install improved facilities for buses at Waterloo roundabout. Throughout the project TfL has ignored comments made by us on the proposals, exactly as happened at Vauxhall Cross. The works are now on site and an already dangerous junction has become even more hazardous for cyclists.

"The Mayor's congestion charge has resulted in large numbers of Londoners getting out of their cars and switching to a healthy cycling alternative. This benefits all Lambeth and Southwark residents and we do not want any cyclists returning to their cars because cycling in London feels dangerous and unpleasant."

Also meeting the cyclists at Waterloo to hear concerns was Andrej Znak from TfL.

• Students and visitors arriving at Morley College by bicycle now find smart new racks in front of the college's main entrance providing secure parking for 24icycles. Morley student Rebecca Lack said: "They are smart and send out the right message that Morley College is a community facility which is accessible. Before these were installed, people necessarily used railings and parking meters to the side of the college, blocking the narrow pavement. On some occasions, I have counted as many as 38 bikes attached to street furniture. These new racks are on a very wide pavement and do not cause an obstruction."