Plans to build 25-storey twin towers with dozens of new homes on the site of the Texaco garage on Albert Embankment have been approved unanimously by members of Lambeth's planning applications committee. 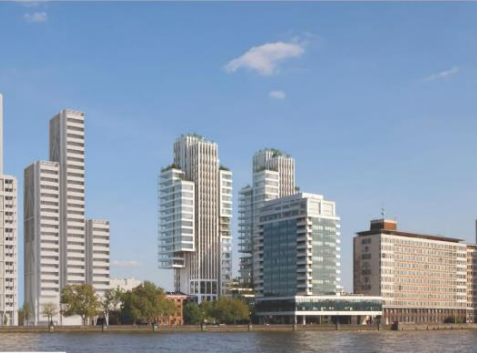 The proposed towers viewed from Millbank, outside Tate Britain

The 166-home scheme includes nine 'affordable rent' homes and 39 shared ownership homes, with the Balance of the developer's affordable housing contribution to be provided by an in-lieu payment to Lambeth Council of nearly £10 million.

Developers Ocubis won backing for the scheme – designed by Make architects – at a Lambeth planning applications committee meeting at the end of last month.

"We've generated a building form which responds to the character and grain of the conservation area by breaking down the building mass into a series of vertical elements which cluster into two forms," said Jason Parker of Make architects.

He added: "The Victorian engineering heritage of the 19th century which allowed the Albert Embankment to flourish has been reflected in the building design."

Mr Parker said that the lower levels of the stone facade of the new buildings would be carved with a design inspired by the nearby Royal Doulton works.

In their report to councillors, Lambeth planning officers said that "the architecture adopts a contemporary appearance and pallet [sic] of materials in keeping with the evolving skyline along this section of the Albert Embankment...".

Vintage House – which adjoins The Rose pub – will be retained and refurbished as part of the scheme.

"They add historic, architectural richness and delight in what is otherwise the realm of modern towers."

The report adds that "the proposed cantilever element over Vintage House offers a moment of architectural drama to this unusual relation of old and new.

"In this respect the contrast between old and new is made more striking.

"It is considered that this sort of approach will only be successful because it is a one-off and because of the unique characteristic of this site and this conservation area."

Councillors were told that by accepting the £10 million in lieu contribution, the council would be able to provide more affordable housing than the developer would be able to if it was provided as part of the main development.

Officers also highlighted that the nine affordable rented homes in Vintage House would benefit from a "very nice address" on Albert Embankment.

The committee meeting was addressed by representatives of residents of Vauxhall Walk who pointed out that this proposal – unlike others on Albert Embankment – is for a site not previously occupied by a substantial building.

Christian Kerrigan, chair of Vauxhall Gardens Community Centre, warned that the new building would affect light to nearby artists' studios.