Southwark planners have refused permission for three food kiosks underneath the railway bridge on Blackfriars Road. 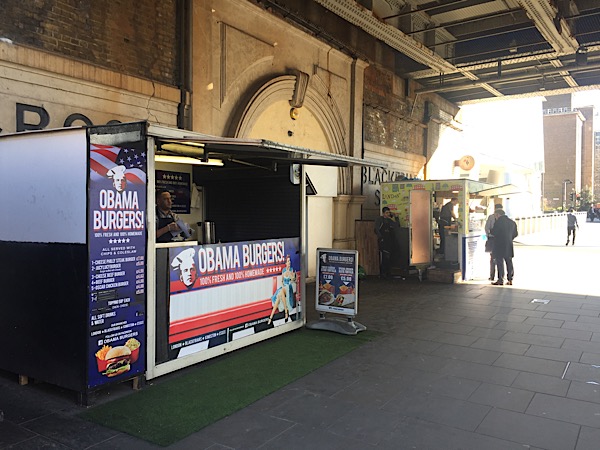 Curzon Concepts applied to the council in 2015 (15/AP/0298) for permission to place three food and drink kiosks on the eastern side of Blackfriars Road, underneath the railway bridge.

This month Southwark planning officers turned down permission for the kiosks which include Obama Burgers and the Lebanese Grill.

The council says that "the continued use of the stalls would harm the amenity of the area from odour from the cooking of food".

Transport for London also objected to the fact that the kiosks block the view of the Charing Cross Railway lettering which was restored in 2007 with funding from the Railway Heritage Trust.

"The retention of the stalls on this site would cause substantial harm to the non-designated heritage assets which are the railway signs behind the stalls," says the council's decision notice.

The notice also describes the stalls as "an unattractive addition on the street consisting of poor materials and giving rise to a cluttered appearance harmful to the visual amenity of the area".