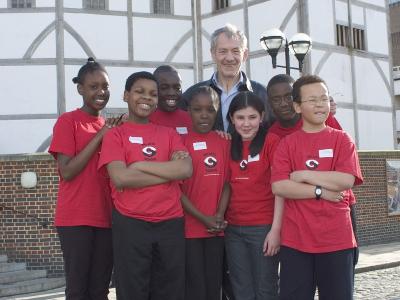 Others speaking in support of the festival included Belinda Lithgow, headteacher at Tower Bridge Primary School.

STEP, which offers a week of events from Saturday 24 April, is the first ever borough-wide festival of theatre.

Robbie Gee, who played The Peckham Prince in Desmond's, introduced a preview of a production by the SE1-based Box Clever Theatre Company to be staged at the Southwark Playhouse.

Also at the Playhouse will be Evacuees, a dramatisation of childhood experiences of World War Two drawing on memories of Southwark pensioners at Blackfriars Settlement and performed by Southwark children.

Students from Southwark schools will present Romeo and Juliet at Shakespeare's Globe. Other festival venues are the Old Vic Theatre, the Young Vic and the Union Theatre.