&quot;We wish to play our part in this community in Waterloo&quot; said Kevin Spacey when announcing his first Old Vic season. 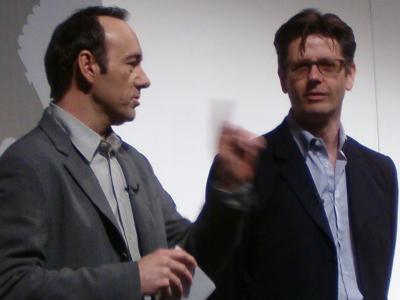 "We are here for the long term" added the new American artistic director who stressed that he was not commuting to and from New York. "I live here now".

He also announced details of a pantomime next December when the Old Vic will be presenting two performances of Aladdin at substantially reduced prices for Waterloo residents. Sir Ian McKellen will play Widow Twankey.

Kevin Spacey took to the stage to announce four productions starting in September with the British première of Cloaca by Maria Goos. The cast will include Neil Pearson and Stephen Tomkinson. 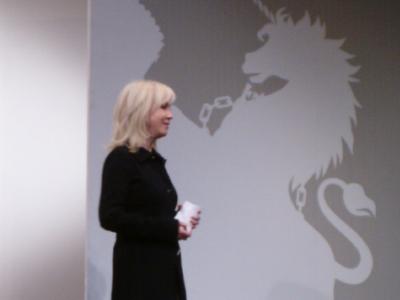 The rights to Dennis McIntyre's National Anthems have been held by Kevin Spacey since 1989 and he will make his debut as one of the three characters in January.

The fourth production, starting in May, will be The Philadelphia Story by Philip Barry. Although the Broadway comedy became a film this will be the first time it has been staged in London.

"I am walking towards something that is tremendously satisfying" declared Kevin Spacey who confessed that he had never seen a pantomime. "It's worth the risk".

Alongside the Artistic Director was producer David Liddiment who announced reduced price seats offer for young people at all performances.

The press conference was opened by the head of the theatre's trust Sally Greene who described herself as "Kevin Spacey's landlady".