"I am strongly of the view that it should not happen" said Simon Hughes MP when declaring his opposition to the Berkeley Homes development plan for Potters Fields. 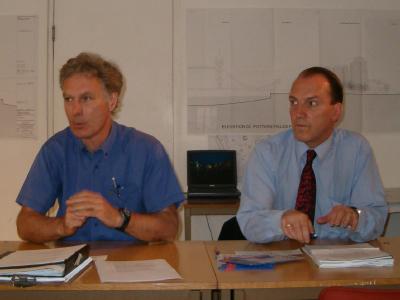 Hugo de Burgh and Simon Hughes at the press conference

The MP was speaking on the eve of a public inquiry which opens at Bankside House on Wednesday 28 April.

Berkeley Homes is appealing against the refusal of Southwark Council to give planning permission for eight cylindrical towers including a 19-storey building on the site next to Tower Bridge.

"This is the most important planning application in the constituency and on the river in central London" said Simon Hughes who is to give evidence at the inquiry. "It's one of the few remaining sites in a prime position and we need to get it right."

Also speaking at a press conference in nearby Nutmeg House was Tooley Street & Tower Bridge Community Association chairman Hugo de Burgh who said that the flats plan was "out of keeping, would ruin our lives and spoil the view for visitors".

Resident Alan Chapman, who has been co-ordinating opposition since the residents passed a unanimous resolution against the plans, said that he yet to meet anyone who backed Berkeley Homes' current proposals.

"This planning inquiry will throw open a stark choice" says Cllr Nick Stanton, leader of Southwark Council. "Should Potters Fields be used to build flats that only a fraction of Londoners could afford, or should it become the location for a world class cultural attraction and two new primary schools serving Southwark's children? There is no doubt that Southwark needs more affordable housing and we are working to deliver this throughout the borough. But we also need investment, jobs and school places for our growing population, things that Berkeley Homes' proposed scheme simply will not provide."

Simon Hughes said that this was just the latest community battle against unnecessary development. They had seen off a glass and concrete plan for the More London site and an opera house plan for Potters Fields.

"We are not saying that nothing new should ever happen. We want the river front to be lively. The old car park site should be developed but not this" he added.

"The site should be seen in context as one of London's four World Heritage sites. The others are Greenwich, Westminster and Kew Gardens.

"This is World Heritage because of Tower Bridge and the Tower of London. What you do with the south side should complement it.

"I have made it clear to Berkeley Homes that it is an inappropriate set of buildings and inappropriate for a site of world importance to be for high cost housing.

Simon Hughes called on all those who opposed the plan to make themselves known to him and the inquiry and to help persuade Berkeley Homes that their plan is opposed widely and not good for Berkeley Homes.

The Royal Palaces Agency, representing the Tower of London, and English Heritage are also opposing the scheme.