Arts Minister Estelle Morris has launched Museums and Galleries Month 2004 at the Hayward Gallery and used the opportunity to explain what a museum means to its community.

Beginning on May 1, Museums and Galleries Month is the largest event of its kind in the world, with around 1500 institutions all over the country taking part.

Organised by the Campaign For Museums and engage, the event offers the UK's museums and galleries a chance to bring their treasured collections to a wider audience.

Speaking at the Hayward, Estelle Morris used her experience of a visit to an exhibition launch in Sunderland to explain the role a museum plays in the life of a community.

"It was their gallery and their museum, showing things that were about their history – and they were proud," she said.

"These were people who don't have money, don't have degrees, but had a sense of who they were. I thought in some ways that summed up the preciousness of what museums and galleries have to offer to our society." They were, she added, "celebrating, as a community, what they were all about."

This was proof, the minister explained, of the success that initiatives such as Renaissance in the Regions and free entry to national museums are achieving.

"There are lots of people in positions of power who don't quite get what museums and galleries are," she said, "they think they're quite a nice place to take the kids on a Sunday, but not actually a cog in the wheel of UK Plc."

However, it's not just the quantity of people making use of the UK's cultural institutions, but who they are and that is what, according to Estelle Morris, makes them an indispensable asset.

"When I'm trying to justify something I say imagine what it would be like if it wasn't there. Imagine what life would be like if museums and galleries weren't there, we wouldn't be able to learn from them, we'd have no sense of the higher standing of mankind and that we are part of something greater, something bigger." 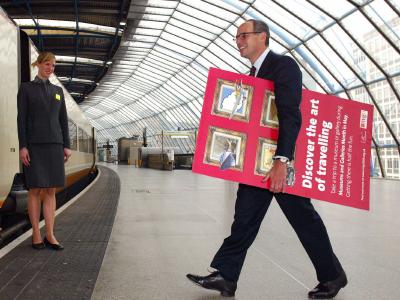 Speaking to the 24 Hour Museum, Loyd Grossman, chairman of the Campaign for Museums and co-chair of MGM, welcomed the minister's comments.

"It's very important to have a minister who realises that museums and galleries are not a marginal issue, but that they are absolutely at the centre of society," he said.

"We don't have a society unless we have healthy museums and galleries and she realises that and articulates it."

This year, with the 200th anniversary of steam in mind, MGM is centred around the theme of travel and is fittingly sponsored by Eurostar whose 10th birthday also falls this year.

The ten Discover London Trails link smaller museums and galleries with other attractions of interest in half day and full day trails in areas such as Wimbledon, Hendon, Southwark and Lambeth, Greenwich and Rotherhithe as well as Covent Garden and the City of London. The trails which will be hosted on the Visitlondon website as well as accessible through www.may2004.org.uk have been funded by Archives Museums Libraries London, the new agency for London's museums.

Many museums and galleries throughout London will also be taking part in Museums and Galleries Month by staging exciting and entertaining events and activities for visitors from 1 – 31 May. Special events are also planned for the London Weekend on 22nd and 23rd May.