A man convicted of sexually assaulting girls and women during their daily commutes - including one attack near the Elephant & Castle - has been sentenced to six years in jail. 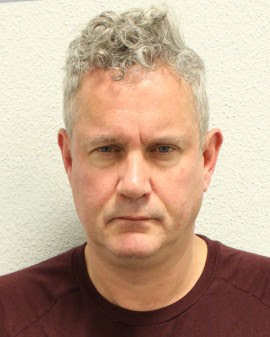 Police produced this map of the 14 offences, with blue dots showing Bond's workplace at LSBU and his home in Chislehurst

Kevin Bond, 51, from Chislehurst, was handed the jail term at Woolwich Crown Court on Monday following his conviction at the same court on 4 June when he pleaded guilty to 14 sexual assaults between October 2016 and November 2017.

These included an assault on a 19-year-old woman in Falmouth Road SE1 at 5.20pm on Thursday 27 July – just a few yards from Bond's workplace.

His victims ranged in age from just 8 up to the age of 27 and the attacks spanned four south London boroughs – Greenwich, Bromley, Lewisham and Southwark – with the majority committed at peak commuting times in the morning and evening rush hours.

Bond, who has two grown up children and grandchildren, went on to his job at London South Bank University after a number of his morning assaults in leafy, surburban streets – attacks which left his victims distressed and terrified after he accosted them on their way to and from school or work.

Some are still suffering from anxiety many months on after their ordeals and continue to be supported by Police and victim support.

Prosecutors said there was a use of violence in the offences and a 'degree of planning as they were committed at specific times of day'.

Bond was finally apprehended by police in January this year through forensics and after being identified from CCTV footage issued last November showing him fleeing the scene of one of his attacks.

He was originally arrested on suspicion of 26 attacks, but finally was charged and pleaded guilty to 14. Police believe it is possible there are further victims who have not yet come forward – and urged any to contact them.

His youngest victim, aged eight, was attacked in Vulcan Terrace, Lewisham, while on her way to school between 8.20am and 8.50am on November 13 last year.

He also struck three times in just 25 minutes in Blackheath on October 5 last year – groping a 13-year-old girl then attacking two women in their twenties.

Temporary Detective Superintendent Andrew Furphy, who led the investigation, said: "These offences have been utterly traumatic for the victims, all of whom have been young females going about their daily lives, to and from school and their workplaces – when Bond appeared and attacked them in broad daylight.

"I would like to pay tribute to their bravery in assisting us with this long-running investigation – as well as the public who provided us with information after the appeals were issued.

"I'd like to thank the Crown Prosecution Service for their commitment to building a robust and complex prosecution case and I'd like to thank my officers who worked tirelessly and relentlessly to apprehend Bond, a dangerous sexual predator.

"It is right that today he has been given a significant custodial sentence. The streets of south London are a far safer place now he is locked up.

"We are however aware that there might be further victims who have not yet spoken to police; if you are a victim, or know someone who has been, I can assure you your information will be treated with the strict
confidence and sensitivity. We also have access to specialist support."

Anyone with information can contact the Lewisham police via 101, or on 020 8284 8346. Alternatively, they can contact the independent charity Crimestoppers anonymously on 0800 555 111.