Polish President's wife Jolanta Kwaniewska, who is on a State Visit to London with her husband, has toured Tate Modern. 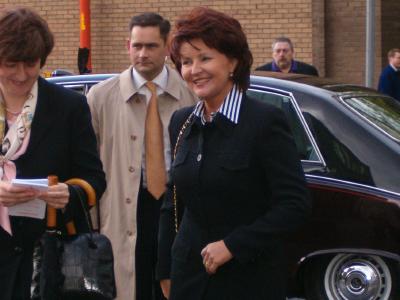 Mrs Kwasniewska abandoned a plan to walk across the Millennium Bridge from St Paul's Cathedral at the last minute due to threatened torrential rain. Instead the Royal car brought her across Blackfriars Bridge to the gallery's main western entrance in Holland Street.

A party of surprised students were leaving the entrance as the Polish party arrived. Tate Modern Director Vicente Todoli and the Tate's senior curator Frances Morris walked quickly round from the riverside to greet the visitor.

The tour inside the Tate included the current Brancusi exhibition.

Afterwards the Polish First Lady drove to St James's Palace to meet members of London's Polish community. The President had spent the afternoon at the University of London's Senate House.

The couple are due to be shown the view of Tower Bridge, Potters Fields and City Hall from the Tower of London on Friday.

• A 62 round Royal Salute was fired from the Tower across the Pool of London as the President and his wife arrived on Horse Guards Parade to be welcomed by the Queen.