The City of London Police have released images of a man they wish to speak to as part of their investigation after a woman was raped near Bank in the Square Mile. The man was seen on CCTV crossing London Bridge twice on the night of the incident. 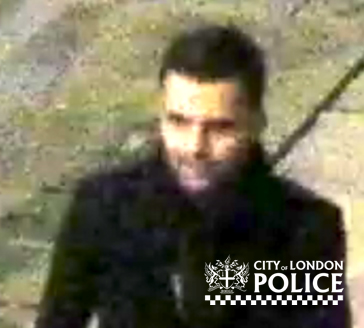 Police in the Square Mile launched an investigation after a woman was raped in St Michael's Alley, off Cornhill, near Bank, at about 3am on Friday 7 December.

"This was a distressing attack on a young woman in the very heart of our City," said Commander Jane Gyford of the City of London Police.

"We have identified from CCTV footage a man we need to speak to and if you recognise this person, it is vitally important you get in touch with police immediately."

The man is described as having brown hair, white, possibly olive skin, and of a slim build. On the night of the offence he was wearing black trousers, a black blazer and a black scarf. He appeared to be walking quickly.

The man is seen on CCTV crossing London Bridge (east pavement), heading north from the Southwark side, at midnight.

He walks all the way through the City towards Liverpool Street where he is seen turning left onto Bishopsgate at approximately 12.30am. At 2.30am he is seen on Norton Folgate, heading towards Worship Street.

The man re-enters the City at around 2.45am where he is seen walking along Liverpool Street, into Old Broad Street and along Threadneedle Street. He is then seen outside a bar on Cornhill.

The man is seen on camera leaving the area where the woman was attacked and making his way south of the river.

He leaves the City at approximately 3.20am via King William Street, Monument Junction and finally, London Bridge.

After walking over London Bridge he enters the Clink Street area of Bankside at 3.30am.

The City Police are liaising with their Met Police counterparts in Southwark to trace the man in the image.

"Attacks like this are fortunately extremely rare in the City of London," said Commander Gyford.

"We strive to keep our communities safe which is why we need to urgently speak to anyone who knows the man whose image we've published today."

Anyone with information is urged to call police on 020 7601 2988. Information can also be provided anonymously to the independent charity Crimestoppers on 0800 555 111 or via http://mipp.police.uk by quoting 'Op Kaus'.