As part of a forthcoming advertising campaign Volkswagen created a life-sized ice sculpture of their Polo Twist model and parked it outside the Saatchi Gallery in Belvedere Road. 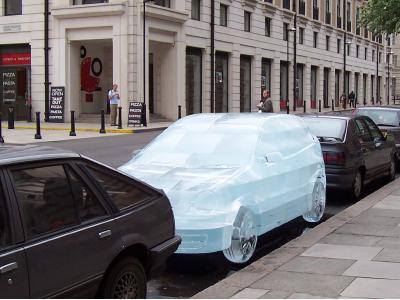 The sculpture was made from 9.5 tonnes of ice imported from Canada, by a company which specialises in ice carving, The Ice Box. The Polo took around 350 hours to create, and was hand-carved by three sculptors in a freezer at -10 degrees. The final carving weighed around 8.5 tonnes, and was transported in 100 individually wrapped sections by 'freezer freight'. Once installed in Belvedere Road it was gone within 12 hours. Had the sculpture been allowed to melt naturally, it would have taken around 36 to 48 hours to disappear.

Ice Box managing director Philip Hughes commented: "We have worked on hundreds of projects for major brands throughout the UK and Europe, mainly for live communications and events. However, the Polo Twist is the largest project for a specific shoot and single piece of advertising."

The images of the ice car will be used in a four-week national press advertising campaign for the Twist – which comes 'chilled' with free air conditioning – starting on Thursday 27 May.

The question remains – did Volkswagen pay the congestion charge for the ice car...?