Drama in the Pool of London as ship hits Tower Bridge

A three masted tall ship sparked a major incident in the Pool of London when it struck the south pier of Tower Bridge. 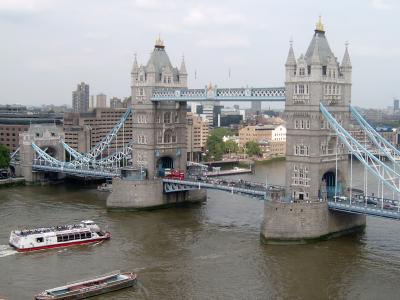 The operators of the Lord Nelson believed they had arranged for the bridge to lift, but the bridge authorities deny that a passage through the bridge had been booked.

The drama happened shortly after 10am on Saturday morning.

"We were cleaning the lifeboat and could hear the Lord Nelson radioing Tower Bridge asking them to lift the bridge" said Stuart Richardson, helmsman of the lifeboat based at nearby Tower Pier. "There was a strong tide running and the Lord Nelson tried to turn around but could not do so in time and struck the south buttress of the bridge.

"Our lifeboat and a PLA launch pushed against the bow of the Lord Nelson to keep it steady and save the masts being damaged on the bridge until a tug pulled the Lord Nelson clear."

There was a fear that the ship's bow could be pushed under the bridge, snapping its three masts across the bridge where a small crowd had gathered.

The 49 people on The Ship – a sail training vessel which aims to integrate able bodied and disabled people – put on lifejackets in case the situation deteriorated.

Andy Spark, ship operations manager of the Jubilee Sailing Trust, which owns and operates the Lord Nelson , said: "We believed the bridge was booked, but it didn't open – we don't know why yet. The master took avoiding action but she's bumped the south tower. No one was hurt and there's only superficial damage to the ship."

A spokeswoman for the Corporation of London, which owns the bridge, said: "The bridge authorities have checked the paperwork and no lifting of the bridge had been booked in."

The Port of London Authority's spokesman said: "There was not much damage to The Ship – it was a scrape and a bump."

The accident will be the subject of an inquiry by the Marine Accident Investigation Branch.

Tower Pier lifeboat was introduced in 2002 and is one of four based on the Thames, operated by the RNLI and supported entirely by voluntary contributions.