EDM brings democracy to the decks at the Southwark Rooms

Everyone Deserves Music at the Southwark Rooms rejects conventional DJ snobbery by handing music selection duties over to the crowd. 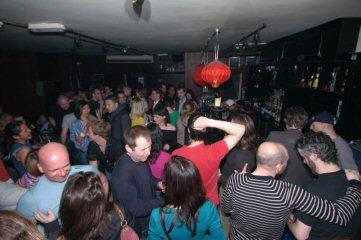 Willing punters are asked to bring their favourite tunes and step up to the decks to play a 10 minute pre-booked slot.

Thursday 20 May sees the return of Everyone Deserves Music after a memorable April opening night at the Southwark Rooms in Southwark Street.

On the Thursday before Easter,more than 120 people descended on the basement bar to enjoy a diverse range of tunes – all of them chosen by members of the crowd.

Everyone Deserves Music welcomes all musical genres, aiming for an â€˜anything-goes'
atmosphere where the people – not the club – decide what the night will sound like.

Doors open at 7pm. Only a finite number of DJs can play on any one night, so if you want to play be sure to turn up early to book your slot. Aspirant DJs are dealt a playing card on entry and await their turn at the decks. Everyone Deserves Music welcomes songs in any format: Vinyl, CD or Minidisc/MP3 players.

• Everyone Deserves Music is on Thursday 20 May in the Basement bar, Southwark Rooms, 60 Southwark Street, 7:30pm – Midnight
• Admission: £4 (£3 with filled-in flyer)