Magistrate gets suspended sentence for fraud

A magistrate from North Lambeth has been given a suspended sentence for her part in a £61,500 fraud, following an investigation by Metropolitan Police detectives. 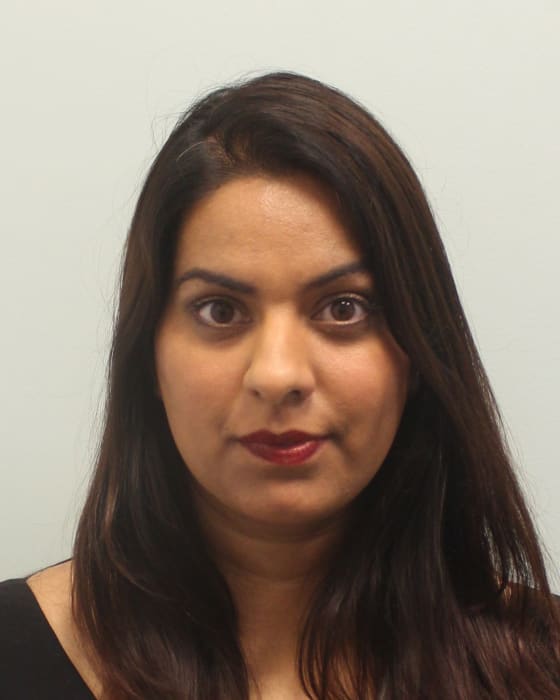 38-year-old Alia Arain – a magistrate – of Albert Embankment SE1 was sentenced to 10 months in prison – suspended for 18 months – for conspiracy to commit fraud by false representation.

She pleaded guilty at Inner London Crown Court on 29 November 2018. She must carry out 150 hours' unpaid work and pay a victim surcharge of Ł140.

Her boyfriend, Ashad Adams (40) of Ardoch Road, SE6 was sentenced to a total of three years' and three months' imprisonment years for conspiracy to commit fraud by false representation, converting criminal property, possession of drugs (cannabis) and breaching a suspended sentence. He pleaded guilty on 14 September 2018 at Inner Crown Court on 17 August 2018. He must also pay a victim surcharge of Ł170.

Adams' friend Mohammed Shalim Ahmed (40) of Rainham, Essex was sentenced to nine months' imprisonment, suspended for 12 months, for money laundering and converting criminal property. He was found guilty of at Inner Crown Court on 15 May 2019, following a trial. He must also carry out 120 hours' unpaid work.

Arain and Adams defrauded Arain's landlady of the money by forging her signature on a cheque from a new chequebook posted to their address in error.

The cheque was then paid into Ahmed's account on 20 February 2018.

Arain and Adams planned to go on holiday to celebrate their criminality once they had laundered the money however, just four days later on 24 February, their plan unravelled when police were alerted to their suspicious activities.

Acting Commander Alexis Boon, head of the Met Police Counter Terrorism Command, which took on this case unconnected to terrorism owing to the expertise of its National Terrorism Financial Investigation Unit, explained: "The group's scheme quickly began falling apart when Adams and Ahmed tried to launder a large portion of the cash by changing into Euros at a money exchange bureau in Heathrow Airport. The staff were rightly suspicious and called the police who from that point began unpicking the group's criminality."

When officers went to the bureau, police identified that Adams was wanted for having unpaid court fines. Adams asked Ahmed to pay the money off, which Ahmed did with money they had – unbeknown to police at the time – defrauded from Adams' landlady.

Ahmed, having not been linked to any offences at this point, was free to leave.

However, police officers arrested Adams for fraud, for hiring a car which he drove to the airport, while disqualified. This was an offence for which he was later released with no further action, however, detectives searched the car, finding heroin and related paraphernalia inside. They further arrested Adams in relation to these items however he was not subsequently charged in relation to them.

They also recovered the landlady's chequebook and a bank statement of hers from inside the glovebox. Suspicions raised, officers executed a search warrant at Adam's rented home, finding a second chequebook in the landlady's name.

They also seized just under Ł3,000 cash that Adams had on him at the time, under the Proceeds of Crime Act.

Ahmed, meanwhile, set about spending the remaining money from the fraud on a Ł10,450 Rolex watch.

Acting Commander Boon continued: "Much to Ahmed's chagrin, the bank did not clear the cheque, leaving Ahmed more than Ł40,000 overdrawn. Ahmed, realising he would have to pay off the overdraft, had the audacity to call the money crime hotline Action Fraud and claim he had been a victim of fraud."

Detectives continued their enquiries, downloading a series of audio files from Adams' mobile phone, which turned out to be recordings of incriminating phone calls in which he, Arain and Ahmed discussed their illegal activities.

In one such call, in the lead up to the fraud, Arain and Adams discussed whether she had sent him a "signature specimen" – which she confirmed she had – and where the cheque book was, to which Arain confirmed that she had moved it to his underwear drawer.

In another call – just minutes before police stopped Adams at the money exchange bureau – a stressed sounding Adams tells Arain "find me some watches, find me some gold", meaning, identify places to spend the laundered money.

Arain confirms "I've already done that" and provides an itinerary of shops he should visit that morning, and specific items he should buy, including a second-hand watch that she advises holds its value "beautifully".

They also discussed their intention to get away and start a new life after completing their crime.

On 29 April 2018 police interviewed Arain under caution. She initially tried to convince police that she was not involved in the fraud but that Ahmed had planted evidence at her flat.

She also denied knowing the whereabouts of Adams who had failed to appear for an appointment at a police station and was not at his home address, but on 13 July, when police went to Arain's address to search it, they found Adams inside. They recovered a small quantity of cannabis and another mobile phone from him, containing yet more recordings of incriminating phone calls between he and Arain, this time discussing the police investigation.

Police arrested and charged Adams with conspiracy to commit fraud on the 15 July 2018. Ahmed and Arain were charged on 14 September 2018.

Acting Commander Boon concluded: "This group wholeheartedly believed they would pull off their crime and end up with a third of the proceeds each, but they didn't count on the diligence of money exchange bureau staff.

"The actions of staff at the money exchange bureau were superb – they have helped ensure that a considerable fraud was stopped and the culprits held to account.

"The victim has been reimbursed the money by her bank, meanwhile Ahmed continues to owe almost Ł50,000 to his bank."