Living History of the Clink Liberty in the Civil War 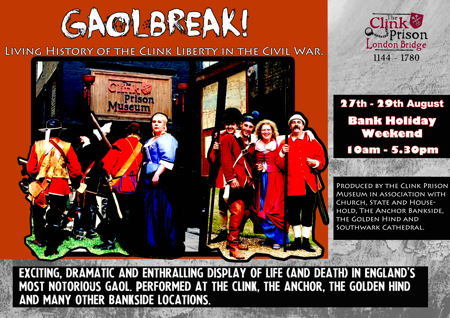 A dramatic display of life (and death) in England's most notorious prison. Performed at the Clink, The Anchor Bankside, the Golden Hinde and other Bankside locations.

'Gaolbreak!' will feature around 24 performers from the Church, State and Household re-enactment group.

The display will paint a vivid picture of the seventeenth century underworld, while telling the story of Southwark in the middle of the conflict; it will represent all walks of life from the parliamentary commissioner to the poor peddler and will show the reasons for the war.

Watch as
• Aging actor Merriweather dies in the Clink Prison; join the funeral procession to Dead Man’s Burial Ground, but was it really smallpox – or something more sinister?

• The infamous Royalist, Sir John Oglander, is unexpectedly transferred to The Clink, but is this a foul plan of his captors – or a scheme of his own? Watch the scene unravel.

• Mistress Beddowes, proprietor of The Castle on the Hoop (The Anchor Tavern) sells more than just ale. Her sudden arrest and imprisonment rocks Bankside to its foundations. Discover what becomes of her.

The action starts inside the Clink Prison, but beware, anything could happen - you could become enmeshed in history yourself - incarcerated, buried or thrown aboard a ship bound for America.