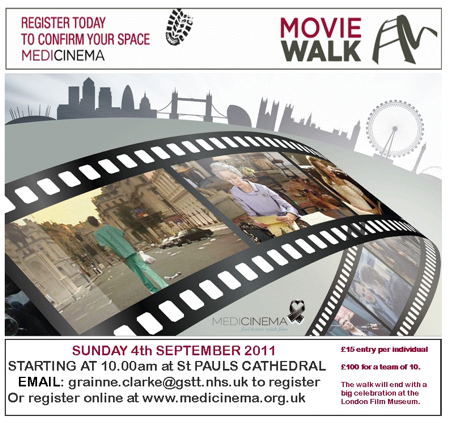 A 10km tour of film and TV locations in central London to raise money for the MediCinema charity.

The walk starts at St Paul's Cathedral and ends at the London Film Museum at County Hall on the South Bank.

Every walker will be provided with a detailed route map to guide and inform them about each location enabling them to take the walk at their own pace.

The route includes notable film locations including the Leaky Cauldron pub that only witches and wizards can see in the Harry Potter films; some of Heath Ledger's last ever scenes in The Imaginarium of Dr Parnassus as well as those from Bridget Jones and James Bond.

MediCinema installs cinemas in hospitals around the UK to improve the difficult reality of being in hospital for patients and their families.