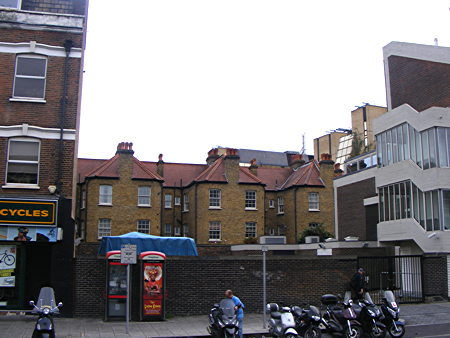 The National Theatre has operated the Studio in The Cut since 1984, developing new work for the NT's stages and allowing actors, writers and directors to develop their skills.

The most widely seen show to have been developed in the Studio is the stage version of War Horse, adapted from the novel by Michael Morpurgo, which is now playing in London and New York and about to embark on a world tour.

The full size horse puppets which have stunned audiences for the last four years are designed and built in Cape Town by the Handspring Puppet Company.

The NT is now proposing to use the vacant yard next to the Studio to build a home for Handspring UK, the newly-formed English arm of the company, which has been set up to develop new projects and opportunities that have arisen from the success of War Horse.

This will be a compact structure, three storeys at the front scaling down to a single storey at the rear, made from modular components, and housing workshops, offices and meeting spaces.

Local residents are invited to view and comment on the designs for the proposed building which will be on display on Wednesday evening.

Members of the architectural team and representatives of the National Theatre and Handspring will be present to answer questions, and there will also be information about the work of the Handspring Puppet Company.

Tea and coffee will be available.

Children are welcome and will be able to see some of the puppets from the Handspring family.