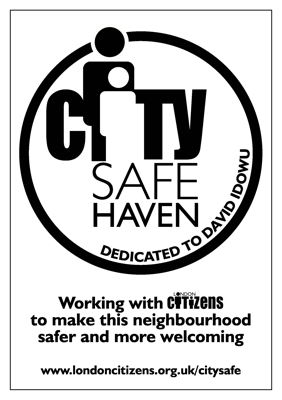 London Citizens launch their 100 Days of Peace campaign to make the capital safer this summer.

CitySafe is an initiative to tackle crime and reconnect fractured neighbourhoods.

Teams of young people build relationships with local shopkeepers and business owners to open their premises as CitySafe Havens. These are places of safety for people in immediate danger, whose staff have also pledged to report 100 per cent of crime to the police.

"CitySafe Havens will save lives," says Grace Idowu, whose son David was fatally injured on the Tabard Gardens Estate.

"One phone call to the police and my son might still be with us.

"The CitySafe sticker means someone will make that call. That is all we are asking, that people look out for one another."

Screen with live footage from the Met helicopter as it visits other sites across the capital.

Balloons are released at the end of the concert.