The Spirit of Shad Thames 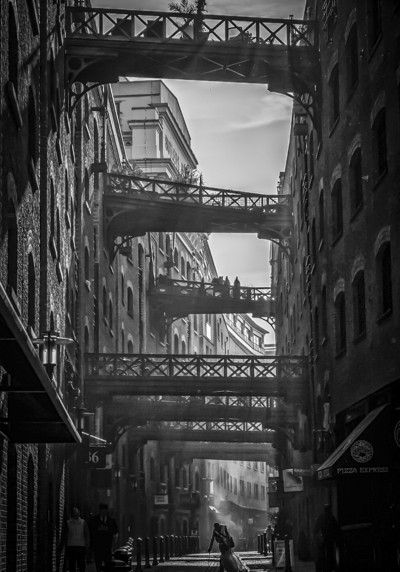 From once being known affectionately as London's Larder, through dereliction to desirability, the history of Shad Thames has been an ever evolving story.

The area has always been firmly on the map. From the early 19th Century, the now picturesque setting of Shad Thames was the centre of the world's biggest industrial port. To today, when people flock to this part of London to see the many delights its windy cobbles hold close.

Thanks to its illustrious trading history, the streets of Shad Thames house the largest warehouse complex in London, retaining such characteristic features as suspended bridges and winches.

It was from here that all of London's tea, coffee and spices were loaded and offloaded from boats travelling along the Thames. Many of the warehouses still retain the names of the spices they stored, and it is fitting that the exhibition is held in Anise Gallery, itself a former spice warehouse.

The 1980s and 90s brought regeneration as developers and designers breathed architectural life back into the area. Converted warehouses, the Design Museum, China Wharf, The Circle, The David Mellor Building and the numerous projects undertaken by Sir Terence Conran all contributed to Shad Thames being reinvented as one of the most unique districts in London, highly sought after as a place to live, work, eat and drink.

This exhibition is a celebration of the wonder of Shad Thames, captured by those who best know its history and secrets, the locals. The photographs on display have been selected from an array of submissions resulting from a competition that was set up by the Shad Thames Residents' Association and reflect, in each individual's eye, The Spirit of Shad Thames.