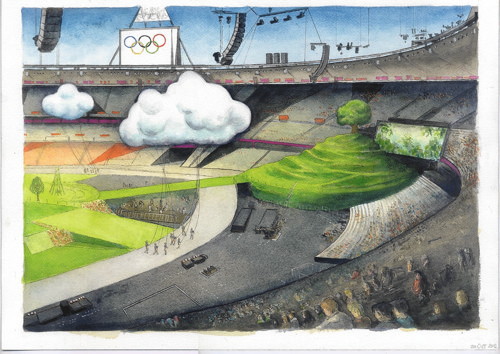 Artist and illustrator Nicholas Garland OBE has captured the colour and spirit of the Olympic and Paralympic games in a series of evocative pictures being exhibited at City Hall and due to be published in a new book.

Highly regarded as a political cartoonist, Garland - who has contributed to leading publications, including the Daily Telegraph, New Statesman, the Spectator and the Independent - was commissioned by the Mayor of London to become artist in residence at the games.

The artist spent the summer documenting the sporting action, crowds and cultural highlights, from the Opening to the Closing Ceremonies, creating a pictorial record, which will become a lasting legacy of the Games to be enjoyed by future generations.

Working in gouache, watercolour, ink and woodcut, Garland captures the spirit of last year's events, vividly depicting the athletes, the Olympic Park and the venues, as well as the mood of the crowds and the spirit of the volunteers.

The pictures are available for sale to collectors and the wider public and will be published in a special book, Drawing the Games: A Story of London 2012, which was commissioned by the Mayor of London and is being published to coincide with the first anniversary of the opening weekend of the Games. Money from sale of artworks and book will go to The Legacy List, which was set up in 2011 to support the legacy of the London 2012 Olympic and Paralympics Games.