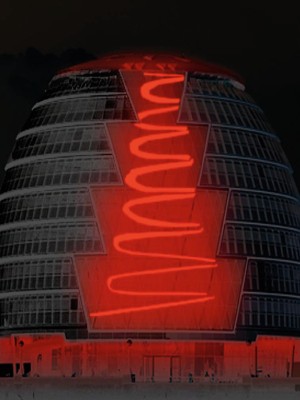 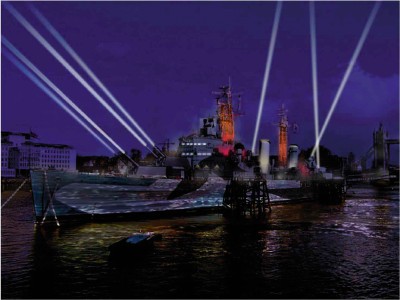 A nine-night celebration of the relationship between light, architecture and the city, and consists of temporary lighting installations and a series of light related events with an overall concept of theatre.

Switched On London will feature a host of spectacular projects temporarily and spectacularly illuminating some of the Pool of London's landmarks including HMS Belfast, City Hall and the Tower of London.

Switched On London aims to raise the challenge the perception that exterior lighting always leads to wasted energy and light pollution.

Switched On London opens on Thursday 8 February with a launch event on HMS Belfast dramatically illuminating the flagship of British naval heritage.

The Tower of London project sympathetically highlights the features of this historic site, incorporating energy efficient light sources supplied by Philips lighting. This means that the scheme will actually lead to a reduction in energy consumption, compared to that already deployed.

The illumination of City Hall is powered by a sustainable LED energy source. Using LED colour change projectors, the design will focus on tonal colour that will emphasise the theatrical aspect of the building.

Jason Bruges Studio has designed a stunning concept using the movement of people carrying Bluetooth devices on London bridge to transmit information across the Pool of London to the high level walkways on Tower Bridge, where a dynamic band of light displays the activity for all to see.

This project uses 320 LED light strips, each one only using about 8 watts of electricity. It is estimated that over the ten days that the festival is operating, and based on average domestic electricity prices, the running cost will be about 20.

Lighting will present a contemporary and radical approach to lighting architecture on Thursday 15 February. Illuminating seven London landmarks using simple torch lights with rechargeable batteries and a team of 'guerrillas'.